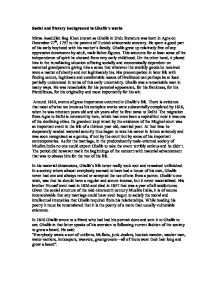 Social and literary background to Ghalib's works Mirza Asadullah Beg Khan known as Ghalib in Urdu literature was born in Agra on December 27th, 1797 to the parents of Turkish aristocratic ancestry. He spent a good part of his early boyhood with his mother's family. Ghalib grew up relatively free of any oppressive dominance by adult, male father-figures. This accounts for at least some of the independence of spirit he showed from very early childhood. On the other hand, it placed him in the humiliating situation of being socially and economically dependent on maternal grandparents giving him a sense that whatever the worldly goods he received were a matter of charity and not legitimately his. His preoccupation in later life with finding secure, legitimate and comfortable means of livelihood can perhaps be at least partially understood in terms of this early uncertainty. Ghalib was a remarkable man in many ways. He was remarkable for his personal appearance, for his frankness, for his friendliness, for his originality and most importantly for his wit. Around 1810, events of great importance occurred in Ghalib's life. There is evidence that most of what we know as his complete works were substantially completed by 1816, when he was nineteen years old and six years after he first came to Delhi. The migration from Agra to Delhi is notewotrthy here, which had once been a capital but now it was one of the declining cities. Its grandeur kept intact by the existence of the Mughal court was an important event in the life of a thirteen year old, married poet. At that time he desperately needed material security thus began to take his career in letters seriously and was soon recognized as a genius, if not by the court but by some of his important contemporaries. As for the marriage, in the predominantly male-oriented society of Muslim India no one could expect Ghalib to take the event terribly serious and he didn't. ...read more.

His letters are some of the most graphic and vivid accounts of British violence. The years between 1857 and 1869 were neither happy nor very eventful ones for Ghalib. During the revolt itself, he remained confined to his house, undoubtedly frightened by the wholesale massacres all over the city. Many of his friends were hanged, deprived of their fortunes, exiled from the city or detained in jails. He was a shrewd and a realistic man as he estimated that the revolt was bound to fail and that would bring disaster in its train. But if his sympathies were not with the rebels, neither did he condone the excesses which the British committed especially against the Muslims. He writes in a poem of the time: "Now every English soldier that bears arms Is sovereign, and free to work his will... The city is athirst for Muslim blood And every grain of dust must drink its fill..." Ghalib has written bitterly of the execution of three Muslim Nawwabs of three small estates in the neighborhood of Delhi. The events of 1857 had deeply affected his family as well. Extracts from his diary highlight's their own story: "I am face to face with misfortune...Some five years ago I took to my bosom two orphaned boys from the family of my wife, prime source of all troubles. They had just learned to talk, and love for these sweet-speaking children has melted me and made me one with them. Even now in my ruined state they are with me, adorning my life as pearls and flowers adorn my coat....This is another heavy sorrow, another calamity that has descended on me like an avalanche.....we live in anxious thought for bread and water and die in anxious thought of shroud and grave." A year later when Ghalib looked back on the events, what grieved him the most was the loss of so many friends. ...read more.

As he says: 'He whom I worship lives beyond the bounds of comprehension. To the seeing eye, the temple of worship is only a symbol of the real temple.' Ghalib intersperses sunshine and joy with despair and darkness. His poems are lit up with a humor subtle and delicate like a bloom on a flower. Another common aspect of his works with other poets is the idea of pathos and sufferings of life, which he incorporates in his poetry. It seems as if Urdu literature poets are deeply inspired by pain, anguish and misery. However this adds a lot of true human emotions to their works. The following couplet shows the pathos and the haunting quality of his work; 'It reminds me of the number of sore spots in my heart owing to longing unfulfilled. Do not therefore ask me oh god! to render an account of the sins committed by me.' Ghalib has many facets to his power and skill of writing poetry. His works are always a source of inspiration and joy for his readers. Ghalib holds free thinking and atheism to be abhorrent, and wine drinking to be forbidden, and him to be a sinner. He spent much of his time in correcting and polishing the verses which his many friends who bowed to his poetic superiority submitted to him. It was a task that Ghalib enjoyed and and it is evident that he took great pains with it. Ghalib was kind and firm. He had a very independent approach to the Persian usage and Persian poetry. In the last years of his life, writing letters and correcting his friends' verses remained virtually his own occupation. His health was failing. In 1863 he fell ill again, and this time it was a painful, long-continued illness which depressed and embittered him. The conduct of his friends at this time distressed him a good deal. His memory began to fail him more and more. By February 1869, Ghalib was on his death bed. Nonetheless, he died knowing that men of his own age had not valued him at his true worth. ...read more.