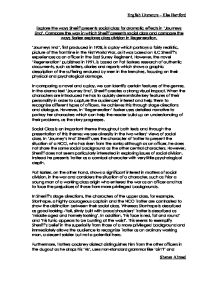 Explore the ways Sheriff presents social class for dramatic effects in 'Journeys End'. Compare the way in which Sheriff presents social class and compare the ways Barker explores class division in Regeneration. 'Journeys End', first produced in 1928, is a play which portrays a fairly realistic, picture of the front line in the First World War, as it was based on R.C Sherriff's experiences as an officer in the East Surrey Regiment. However, the novel 'Regeneration' published in 1991, is based on Pat Barkers research of authentic documents, such as letters, diaries and reports which shows a graphic description of the suffering endured by men in the trenches, focusing on their physical and psychological damage. In comparing a novel and a play, we can identify certain features of the genres. In the drama text 'Journey End', Sherriff creates a strong visual impact. When the characters are introduced he has to quickly demonstrate key features of their personality in order to capture the audiences' interest and help them to recognize different types of officers. He achieves this through stage directions and dialogue. ...read more.

Although other characters such as Raleigh and Osborne seem to interact with him as a down-to-earth, loving character. Stanhope's attitude can be compared with the discussion between Dr Rivers and Prior, in 'Regeneration' which emphasizes specific examples of "snobbery" and expresses a degree of bias in the attitude of the officers from privileged classes. Barker creates a situation where we can distinguish the attitude of a highly educated army captain compared to an "uncooperative" second-lieutenant who is well aware of class divisions as he himself is of a working class background. When we are first introduced to Prior we are aware of his mute condition, as he is unable to communicate throughout his meeting with Dr Rivers; in an attempt to take some control, he writes "THERE'S NOTHING PHYSICALY WRONG..." Rivers reaction is shown to be extremely patronizing, when he corrects Priors spelling: "Two L's in 'physically', Mr Prior." Prior naturally resents this and later on River himself referrers to it as "insufferable". This again creates an example of the class divisions between those of lower classes, within both texts. In addition, Barker uses the character of, Prior to illustrate class prejudice at the front. ...read more.

Bitterness in Stanhope's tone also shows the emotionally trembling effect of warfare. When we notice Trotter talking of "that gas that smells like pear-drops" this is a representation as to how we interpret Trotter, and therefore indicates him as an inferior intellectual character in comparison to the other well educated upper class officers. Trotter seems almost unaffected by the war; alternatively he concentrates upon his daily routine of eating, standing on duty and writing letters home to his wife. When Stanhope asks Trotter about his consistent cheerfulness "I envy you Trotter Nothing upsets you does it? You're always the same." Trotters, short, noncommittal response makes it clear that Stanhope is wrong "Always the same am I? (He sighs). Little you know..." As we read through both, Regeneration and Journeys End, we clearly notice the social division of characters, as they develop throughout both texts. This is reflected through the way in which the characters upbringing is presented, as well as other additional facts. Evidently, we see that R.C Sherriff has presented his play in order to create a presentation of dramatic affects; where the viewers are then draw to consider the social division, in comparison to Pat Barkers interest in social class. ?? ?? ?? ?? English Literature - Elsa Hartford Shanaz Ahmad ...read more.