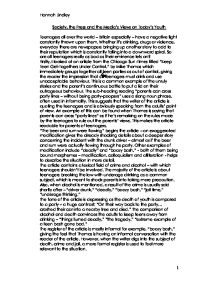 Society, the Press and the Medias Views on Todays Youth

Society, the Press and the Media's Views on Today's Youth Teenagers all over the world - Britain especially - have a negative light constantly thrown upon them. Whether it's drinking, drugs or violence, everyday there are newspapers bringing up another story to add to their reputation which is constantly falling into a downward spiral. So are all teenagers really as bad as their eminence lets on? Firstly, I looked at an article from the Chicago Sun-Times titled "Keep Teen Get-Togethers Under Control," by Mike Thomas which immediately groups together all teen parties as out of control, giving the reader the impression that all teenagers must drink and use unacceptable behaviour. This is a common example of the unruly stories and the parent's continuous battle to put a lid on their outrageous behaviour. The sub-heading reading "parents can cross party lines - without being party-poopers" uses a slang noun phrase, often used in informality. This suggests that the writer of the article is quoting the teenagers and is obviously speaking from the adults' point of view. An example of this can be found when Thomas is saying that parents can cross "party lines" as if he's remarking on the rules made by the teenagers to rule out the parents' views. ...read more.

The use of the homonym "spirit" in the title of the article gives the hint that a similar theory is used in both of these articles - the positive and negative sides of alcohol as the pairing of spirit with teens usually equals a negative outcome when looking at the reputation of alcohol abuse that comes with the stereotype. The comical start to the article gives the impression of the age difference between Hattenstone and the teenage boys where he mistakes the "Xbox" for "Export" - "The teenage lads look at me as if I must be joking." Elias then quoted that 15 is "too old... too young." This hints at the complicated ups and downs of the teenage life by using a contrast of ages. This also compares to the age difference between Hattenstone and Elias as the teenage years seem to contain more of age gap as they grow up rapidly in a small space of time. The use of the noun phrase "world-weary experience" causes irony as a teenager, who is only a few years older than a child, is counted as someone who has seen the world. This could also come across as being sarcastic, as if Hattenstone isn't taking the boys seriously. ...read more.

Looking through the news on teenagers, positive press is rare to find in between the violence and drinking articles, however, an article called "Newport teenager gears up for daring challenge" by Liz Rougvie has a short but optimistic approach to the less talked about side of the age period. With a report on the "Seventeen-year-old Jamie Amrani, of Newport", Rougvie uses a short factual approach to the story of the charity event which he would be taking part in. Although this is a mostly referential article, she uses abstract noun phrase "kind-hearted local people" which contrasts greatly to previous articles - she's asking for the support of adults for the teenagers rather than the conflicting previous. In conclusion, teenagers still have a negative blanket thrown over them - with a few exceptions. Although this most likely isn't the realistic case, the more shocking articles are usually more popular and common to give the media a larger interest from their audience and this sadly gives the impression of the average teenager being part of some out-of-control and monstrous rebellion, which is common for their species. Maybe this has always been the case but according to the increasing number of stories and articles being thrown around the media spotlight, this reputation is only escalating as time goes on. ?? ?? ?? ?? Hannah Lindley 1 ...read more.