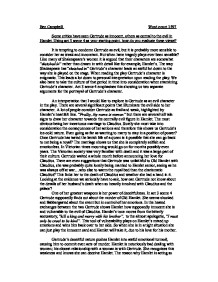 Some critics have seen Gertrude as innocent, others as central to the evil in Hamlet - Using act 3 scene 4 as your starting point, how do you evaluate these views?

Ben Campbell Word count 1597 Some critics have seen Gertrude as innocent, others as central to the evil in Hamlet. Using act 3 scene 4 as your starting point, how do you evaluate these views? It is tempting to condemn Gertrude as evil, but it is probably more sensible to consider her as weak and inconstant. But when have tragedy plays ever been sensible? Like many of Shakespeare's women it is argued that their characters are somewhat "sketched in" rather than drawn in with detail like for example, Hamlet's. The way Shakespeare has "sketched in" Gertrude's character leads an awful lot down to the way she is played on the stage. When reading the play Gertrude's character is enigmatic. This leads a lot down to personal interpretation upon reading the play. We also have to take the culture of that period in time into consideration when examining Gertrude's character. Act 3 scene 4 emphasises this showing us two separate arguments for the portrayal of Gertrude's character. An interpretation that I would like to explore is Gertrude as an evil character in the play. There are several significant points that illuminate the evil side to her character. ...read more.

Shakespeare clearly chose this name because Gertrude isn't an innocent woman, as she likes to portray herself, but a clever powerful woman who is masterful in deceit. We see the deceitful side to Gertrude's nature when she allows Polonius to listen in on a private conversation between mother and son. Why doesn't she just let Hamlet see Polonius? Is it just to avoid confrontation? Or is it because she's holding something back from Hamlet? Another example of Gertrude's dishonesty is when she sends Rosencrantz and Guildenstern to spy on Hamlet. This behaviour is clearly not of an honest person. Hamlet sees through the superficial reason for their visit by cleverly questioning them, but why go behind Hamlet's back so frequently? Upon looking at the side of the argument for Gertrude being central to the evil in Hamlet I would now like to explore the argument for Gertrude as innocent and not a deceitful, evil character. There is a possibility that Gertrude's actions after her husband's death were prompted by self-preservation. A convenient marriage to a known protector would, after all, ensure her safety and that of her beloved son, whom she may have considered too inexperienced and vulnerable to take responsibility of ruling a threatened country. ...read more.

They argue that male criticism over the years has neglected and repressed female experience. Gertrude is at the hands of a male writer and male critics over the years, they too tend to adopt Hamlet's misogynistic views. Rebecca Smith [feminist critic] argues that Gertrude has been: "traditionally played as a sensual, deceitful woman...but the traditional depiction of Gertrude is a false one, because what her words and actions actually create is a soft, obedient, dependent, unimaginative woman who is caught at the centre of a struggle between two "mighty opposites". Upon looking at this secondary criticism it shows us another dimension of argument for Gertrude's innocence as a character. Gertrude's character is very equivocal in that she can be interpreted in many ways, and there be strong arguments for both sides. Gertrude's character is strongly influenced by her stage portrayal. I think Shakespeare did this intentionally to keep a certain ambiguity about the character. We know so far that Gertrude is capable of deceiving people and being sensual but also she puts up pretence that she is completely innocent and frail. Is Gertrude capable of deceiving Hamlet? Are her intentions with Claudius for her own gain? In conclusion I think that Gertrude isn't innocent and weak nor is she central to the evil but she is deceiving and illusory in her actions. ...read more.