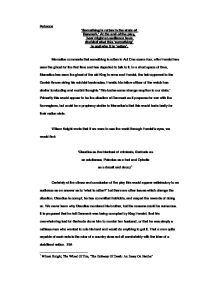 'Something is rotten in the state of Denmark' - At the end of the play, how might an audience have decided what this 'something' is and why it is 'rotten'.

Rebecca 'Something is rotten in the state of Denmark.' At the end of the play, how might an audience have decided what this 'something' is and why it is 'rotten'. Marcellus comments that something is rotten in Act One scene four, after Hamlet has seen the ghost for the first time and has departed to talk to it. In a short space of time, Marcellus has seen the ghost of the old King in arms and Hamlet, the heir apparent to the Danish throne airing his suicidal tendencies. Horatio his fellow officer of the watch has similar foreboding and morbid thoughts 'This bodes some strange eruption to our state.' Primarily this would appear to be the situation of Denmark as it prepares for war with the Norwegians, but could be a prophecy similar to Marcellus's that this would bode badly for their nation state. Wilson Knight wrote that if we were to see the world through Hamlet's eyes, we would find: 'Claudius as the blackest of criminals, Gertrude as an adulteress, Polonius as a fool and Ophelia as a deceit and decoy'1 Certainly at the climax and conclusion of the play this would appear satisfactory to an audience as an answer as to 'what is rotten?' ...read more.

Shakespeare left out a scene that would have answered the crucial question of 'what is rotten?' that where we could see Claudius's reaction to The Mousetrap. Perhaps if we saw repentance or suicidal feelings we would see that Hamlet was the rotten thing, but perhaps if he were seen feeling a greater sense of vilification of killing King Hamlet we would believe the rotten element was Claudius. The Ghost in Hamlet is a very potent symbol of the decay that is taking place in Elsinore. To an audience today it would be seen as a device used for dramatic effect yet in the period it would have told the audience that treachery was rife. Shakespeare had recently written Julius Caesar, and as such his audience would have been well aware of what it symbolised. It also symbolises unrest, the upset of not belonging to either this world or the next, that in fact it belongs nowhere. Another great belief was that ghosts were demonic and would attempt to make a living person do wrong, and some would have believed that the ghost was trying to get hamlet to kill Claudius wrongly. ...read more.

There are many factors governing why Hamlet had become the rotten factor in the state of Denmark, which were caused by a chain of unfortunate events. Shakespeare had written Hamlet as a melancholy character, with whom it is difficult to have sympathy, and yet he finds himself as a tragic hero. His fatal flaw was his indecision. The audience would be able to see that Claudius was a corrupt, selfish character, but like all villains had redeeming features, whilst with Hamlet although he elicits sympathy we have no reason to actually like him. He is melancholy, depressing, rude and troubled, he never makes us empathise with him. Throughout the play there is a sense of fear, doom and fate, mainly expressed by Hamlet. The answer as to why the something is rotten, i.e. Hamlet, then we would have to reason that the events which unfold during the play create serious mental anguish for someone who is already experiencing anguish through the grief at the suspicious death of his beloved father, and the very factor that he sees a supernatural ghost. In conclusion Hamlet is the rot in Denmark because he has experienced problems which he simply has no way of dealing with. 1 Wilson Knight, The Wheel Of Fire, 'The Embassy Of Death: An Essay On Hamlet' ...read more.

This is a good essay which includes critical comments and a strong idea of how the original audience would have responded. The essay remains focused on the question but at times statements need to be supported more strongly by textual evidence. A strong beginning but loses some momentum towards the end.