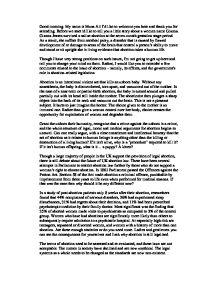 Good morning. My name is Muna Ali I'd like to welcome you here and thank you for attending. Before we start id like to tell you a little story about a women name Gianna. Gianna Jessen survived a saline abortion at the seven-month gestation stage period. As a result, she suffers from cerebral palsy, a disorder that is caused by flawed development of or damage to areas of the brain that control a person's ability to move and stand or sit upright she is living evidence that abortion takes a human life. Though I have very strong positions on such issues, I'm not going to get up here and tell you to change your mind on them. ...read more.

Rather than give a woman control over her body, choice creates the opportunity for exploitation of women and degrades them Grant the unborn their humanity, recognize that a crime against the unborn is a crime, and the whole structure of legal, moral and medical arguments for abortion begins to unravel. Can one really argue, with a clear conscience and intellectual honesty that the act of abortion as it relates to human beings is anything other than the killing or destruction of a living human? If it isn't alive, why is a "procedure" required to kill it? If it isn't human offspring, what is it ... ...read more.

Most significant was the finding that 25% of aborted women made visits to psychiatrists as compared to 3% of the control group. Women who have had abortions are significantly more likely than others to subsequently require admission to a psychiatric hospital. At especially high risk are teenagers, separated or divorced women, and women with a history of more than one abortion. Are these enough statistics or do you need more. Ladies and gentlemen you can see the consequences for yourselves and I ask why abortion is still legalised. The terms of abortion need to be assessed and re-evaluated, and these laws are not acceptable. The morals in society have declined and are now unethical. The legal systems as a whole needs to be changed as the standards are now non-existent. ...read more.