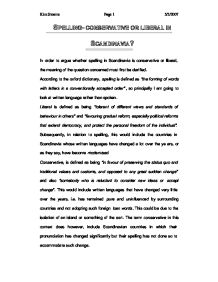 Spelling- conservative or liberal in Scandinavia?

SPELLING- CONSERVATIVE OR LIBERAL IN SCANDINAVIA? In order to argue whether spelling in Scandinavia is conservative or liberal, the meaning of the question concerned must first be clarified. According to the oxford dictionary, spelling is defined as "the forming of words with letters in a conventionally accepted order", so principally I am going to look at written language rather than spoken. Liberal is defined as being "tolerant of different views and standards of behaviour in others" and "favouring gradual reform, especially political reforms that extend democracy, and protect the personal freedom of the individual". Subsequently, in relation to spelling, this would include the countries in Scandinavia whose written languages have changed a lot over the years, or as they say, have become modernised. Conservative, is defined as being "in favour of preserving the status quo and traditional values and customs, and opposed to any great sudden change" and also "somebody who is reluctant to consider new ideas or accept change". This would include written languages that have changed very little over the years, i.e. has remained pure and uninfluenced by surrounding countries and not adopting such foreign loan words. This could be due to the isolation of an island or something of the sort. The term conservative in this context does however, include Scandinavian countries in which their pronunciation has changed significantly but their spelling has not done so to accommodate such change. Another important aspect to consider is which countries does Scandinavia actually consist of? This is a disputed fact and there is no clear-cut answer, as it differs from source to source. According to Microsoft(r) Encarta(r) Encyclopaedia 2002, "Scandinavia (ancient Scandia), name applied collectively to three countries of northern Europe-Norway and Sweden (which together form the Scandinavian Peninsula), and Denmark. The three countries are so grouped because of their historical, cultural, and linguistic affinities. The term Scandinavia is sometimes extended to include Iceland, which is linguistically related to the others, and less often to Finland, which is not linguistically related. ...read more.

The Latin alphabet, replacing runic signs, was introduced with Christianity, and a distinct Norwegian written language evolved in the 11th century. During the subsequent centuries, Danish, Low German, and Swedish influenced the Norwegian language. The Danish influence was dominant between 1380 and 1814, when Norway was united with Denmark under the Danish Crown. Danish, the official language of Norway since 1397, became also, in the 16th century, the written language of Norway. The educated classes, especially in the cities, generally spoke Danish while Norwegian dialects continued in use in the country districts and among the working and middle classes of the towns. Only the upper class of that time read books because they could afford them, and these were all written in Danish, which obviously had some influence over them, speaking Danish. During the 19th century, the spoken Danish developed into a language called Dano-Norwegian, which was heavily Danish in structure and vocabulary, but with native Norwegian pronunciation and some native grammatical influences. Later called Riksm�l, it became the official language of Norway. Subsequently, however, a strong nationalistic movement awakened a desire for a language people felt was their own. In response to this desire, the linguist Ivar Aasen began, in the middle of the 19th century, the construction of a new national literary language, the Landsm�l ("country speech"), based on Norwegian dialects and free of Danicisms. This endeavour won public support, and the Landsm�l, further developed, became an important secondary language. Under pressure of the Landsm�l movement, the Riksm�l went through a series of significant reforms (1907, 1917, and 1938) emphasizing strictly Norwegian speech and spelling. The names of the two languages were officially changed: The Riksm�l became the Bokm�l ("book language") and the Landsm�l, the Nynorsk ("New Norse"). The two languages have equal validity in law, and both must be taught in the schools. The Bokm�l, still the leading language, is strongest in eastern Norway, the Nynorsk in western Norway. ...read more.

It is inevitable that from time to time, words will acquire new meanings. As well as being enriched by new foreign vocabularies, languages also gain more words through other means. As technology advances, new words need to be invented. It's how the countries cope with this change that makes them liberal or conservative. Iceland, for example, refuses to adopt foreign loan words. It instead looks at the new words and compares them to old words with similar roots and adapts them to make them more Icelandic. The most liberal of the written languages is thought to be Norwegian, due to its continuing change from the Danish written norm to Norwegian and it's general liberal political history, from which such change came about. On the whole mainland Scandinavia itself is the most liberal of the Nordic countries, with any surrounding islands (Denmark, Iceland etc.) proving to be more conservative. I believe this is due to the increased simplicity of crossing the border in mainland Scandinavia, whereas travel to surrounding islands proves to be more difficult than simply driving over the border. As I said before it is no longer necessary for citizens to present their passport in order to cross Scandinavian borders and citizens no longer need a visa or to take their social security with them between countries. Therefore this makes it easier to find employment in any of the Scandinavian countries. As a result it has made integration between the countries more frequent. Language in all countries develops depending on the kind of influences it receives, and the extent of those influences. As Norway and Sweden are bordering countries, dialects close to this border are likely to be more similar, influencing both each others written and spoken language, without intention. Norway has however taken on a more conservative approach to written language in recent years, restoring its Norwegian written language from the previous Danish (Bokm�l, originally derived from the Danish language) written normal. It is now trying to keep it Norwegian Norwegian like it's fellow Iceland has kept its Icelandic Icelandic. ...read more.