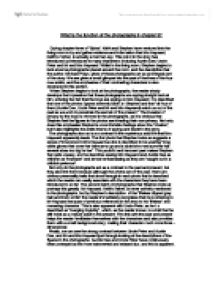 &quot;Spies&quot; By Michael Frayn - What is the function of the photographs in chapter 3?

What is the function of the photographs in chapter 3? During chapter three of "Spies", Keith and Stephen have ventured into the living room to try and gather evidence and information that Mrs Hayward, Keith's mother, is actually a German spy. This point in the story has introduced us introduced to many characters; including Auntie Dee, Uncle Peter and Mr and Mrs Hayward. Whilst in the living room, Stephen begins to look at some photographs placed around the room, and the description that the author, Michael Frayn, gives of these photographs act as an integral part of the story. We are given a small glimpse into the past of the lives of the four now adults, and the emphasise of their contrasting characters is also developed in this section. When Stephen begins to look at the photographs, the reader slowly develops the impression that these photographs are spying straight back at him, echoing the fact that the boys are spying on Mrs Hayward. ...read more.

This youthful and innocent past makes Stephen feel quite uneasy, and he describes seeing Mrs Hayward and Auntie Dee as children as "improper" and almost embarrassing as they are "caught out in a childish pretence". Not only do the photographs act as a contrast to the past and present, but they also link them because although the photos are of the past, there are obvious personality traits that show through in each photo that is described which the reader can easily associate with the characters they have been introduced to so far. The second batch of photographs that Stephen looks at portrays this greatly. Mr Hayward, Keith's father, is never actively mentioned in the photographs, but by Stephen's description of the "lifeless clipped grey hair and ironic smile" the reader immediately recognises that he is referring to Mr Hayward because of previous references in the story to his "lifeless" and menacing character. ...read more.

This is contrasted with the wedding photo of Auntie Dee and Uncle Peter, where Auntie Dee is described as "a little bolder looking" and "a little more up to date". It is immediately recognised by the reader that the man next to her us Uncle Peter, as again he is illustrated as "boyish". This severe contrast of characters shown in the photographs again portrays the difference between the two couples, and also explains to the reader that all four adults have been this way for many years, which again enriches their background story as a character. In conclusion, the photographs in chapter three play an important part in developing and adding to each character, and highlighting the contrasts between them to create a much more realistic feel for the reader. Also, the effective irony of the photos almost "spying" on the boys helps to craft the theme of secrets and spying which is kept up throughout the entire book. ...read more.