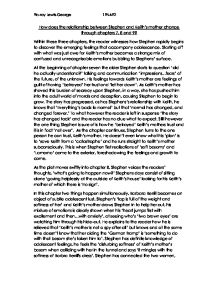 Spies. How does the relationship between Stephen and Keith's mother change throughout the novel

How does the relationship between Stephen and Keith's mother change through chapters 7, 8 and 9? Within these three chapters, the reader witnesses how Stephen rapidly begins to discover the emerging feelings that accompany adolescence. Starting off with what was just awe for Keith's mother becomes a strange mix of confused and unrecognisable emotions bubbling to Stephens' surface. At the beginning of chapter seven the older Stephen starts to question 'did he actually understand?' talking and communication 'impressions...fears' of the future, of the unknown. His feelings towards Keith's mother are feelings of guilt of having 'betrayed' her trust and 'let her down'. As Keith's mother has shoved this burden of secrecy upon Stephen, in a way, she has pushed him into the adult world of morals and deception, causing Stephen to begin to grow. The story has progressed, as has Stephens's relationship with Keith, he knows that 'Everything's back to normal' but that 'normal has changed, and changed forever.' ...read more.

In this chapter two things happen simultaneously, Barbara Berrill becomes an object of subtle adolescent l**t, Stephen's 'lap is full of the weight and softness of her' and Keith's mother draws Stephen in to help her out, his mixture of emotions is clearly shown when his 'heart jumps first with excitement and then...with anxiety', at seeing who's 'two brown eyes' are watching him through his hide-out. He explains to the reader how he is relieved that 'Keith's mother is not a spy after all' but knows and at the same time doesn't know that her aiding the 'German tramp' is 'something to do with that bosom she's taken him to'. Stephen has definite knowledge of adolescent feelings, he feels the 'disturbing softness' of Keith's mother's bosom when colliding with her in the tunnel and says 'it mingles with the softness of Barbra Berrill's dress'. ...read more.

Stephen's respectful of her, looking away when she's going to cry, and still notices the 'softness of her voice, her closeness as she leans towards' him, he is very much aware of her presence, this suggests that he is uncomfortable with his new adolescent feelings. Throughout these chapters Stephen's relationship with Keith's mother changes a lot, certain elements of the novel create this change. Such as, the sudden change in Stephen's mental age as he is forced to cope with the worries of an adult, the end of a childhood friendship and into a teenage crush. As Stephen is made into Mrs Hayward's 'accomplice' in the helping of the 'German tramp', he begins to feel a lot more than mutual respect for Keith's mother and starts to identify with 'Lamorna'. With l**t. In conclusion, it is clear that the relationship Stephen holds with Keith's mother, affects him greatly. He changes in many ways, including maturing dramatically. ?? ?? ?? ?? Flo-ray Lewis-George 1ENAE2 ...read more.