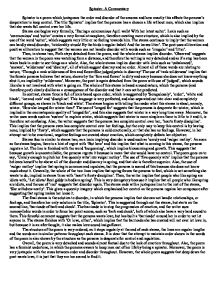 Spinster- A Commentary Spinster is a poem which juxtaposes the order and disorder of the seasons and how exactly this affects the persona's desperation to keep control. The title 'Spinster' implies that the persona has a chosen a life without men, which also implies that she wants full control over her life. Stanza one begins very formally, 'During a ceremonious April walk/ With her latest suitor'. Lexis such as 'ceremonious' and 'suitor' creates a very formal atmosphere, therefore creating more structure, which is also implied by the use of the word 'suitor', which suggests very little or no feeling towards him. The stanza continues to imply that the woman can hardly stand disorder, 'intolerably struck/ By the birds irregular babel/ And the leaves litter'. The poet uses alliteration and positive alliteration to suggest that the woman can not handle disorder with words such as 'irregular' and 'litter'. Then, in stanza two, Plath stays detached from the poem, and the whole stanza implies disorder. ...read more.

Also, the writer suggests that the persona has complete control over her, 'hearts frosty discipline'. This implies that the persona even has complete control over her feelings, but the only way to keep this control is by having none, implied by 'frosty', which suggests that the persona is cold emotionally, or that she has no feelings. However, in her attempt not to be emotional, negative feelings are created about emotion, which completely defeats her objective. Stanza four is similar to stanza two, as a lexis implying disorder is used such as 'unruly and 'vulgar motley'. As soon as the stanza begins, there is a hint of regret with 'But here' and this implies that what is coming in this stanza, the persona regrets a lot. The line is finished with the word 'burgeoning', which implies blossoming and growth. This suggests that because growth is uncontrollable, the persona regrets it because is mean that she would have no control. The poem goes on to say, 'Unruly enough to pitch her five queenly wits/ into vulgar motley'. ...read more.

This forceful comment suggests that the persona wants love, but has built a 'barricade' around her in order to not let anyone in. The stanza finishes with 'Or love, either', which implies that the barricade she has created will not ever let love in, but because it is an afterthought, it also makes love sound insignificant. The structure of the poem is very ordered, as it stops regularly at the end of each stanza, the lines are regular lengths and the words are in similar patterns throughout each stanza. It is clear that the attempt to maintain order shown in the words of the poem is also shown by the structure as the persona is desperate for control and regulation. Overall, the poem is very detached and sounds almost factual due to the lack of emotion throughout. Also, the poem has a feminist undertone, in which the persona swears to keep men out of her life by being a spinster. Moreover, the poem is very juxtapoic with the cross between order and disorder throughout. However, the whole poem suggests that deep down the poet wants love; it is just that they are too scared to find it. ...read more.

This is a good essay which demonstrates an engagement with the poem and some insightful analysis. Evidence from the poem is used throughout which enables detailed comments on Plath's choices of language. There are a few points for improvement:
1) A chronological analysis of a poem is not always the best approach. It can be better to consider various poetic techniques or aspects, such as tone and register, characterisation, setting, themes (e.g. nature), phonological features (use of sound), imagery, use of structure, and use some of these to introduce topics to analyse in detail in different paragraphs.
2) A clear plan can enable this kind of essay structure.
3) Although not always necessary, some contextual references can contribute to analysis. Plath's views on relationships might have been relevant to mention.