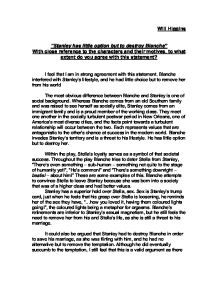 &quot;Stanley has little option but to destroy Blanche&quot; With close reference to the characters and their motives, to what extent do you agree with this statement?

Will Higgins "Stanley has little option but to destroy Blanche" With close reference to the characters and their motives, to what extent do you agree with this statement? I feel that I am in strong agreement with this statement. Blanche interfered with Stanley's lifestyle, and he had little choice but to remove her from his world The most obvious difference between Blanche and Stanley is one of social background. Whereas Blanche comes from an old Southern family and was raised to see herself as socially elite, Stanley comes from an immigrant family and is a proud member of the working class. They meet one another in the socially turbulent postwar period in New Orleans, one of America's most diverse cities, and the facts point towards a turbulent relationship will occur between the two. ...read more.

Stanley has a superior hold over Stella, s*x. s*x is Stanley's trump card, just when he feels that his grasp over Stella is loosening, he reminds her of the s*x they have, "...how you loved it, having them coloured lights going!", the coloured lights being a metaphor for o*****s. Blanche's refinements are inferior to Stanley's s****l magnetism, but he still feels the need to remove her from his and Stella's life, as she is still a threat to his marriage. It could also be argued that Stanley had to destroy Blanche in order to save his marriage, as she was flirting with him, and he had no alternative but to remove the temptation. ...read more.

Blanche is lost. She desperately seeks companionship and protection in the arms of strangers and she has never recovered from her tragic and consuming love for her first husband. Blanche is in need of a defender. But in New Orleans, she finds instead the predatory and merciless Stanley. She is undeserving of the treatment that Stanley gives her. In conclusion I believe that Stanley has little choice but to eliminate Blanche from his life. They are at polar opposites to each other and one could say that Blanche is a threat to his lifestyle as she attempts to bring in new ideals to his world, so Stanley needed to detach her from his life. However it is obvious that Blanche didn't deserve such brutal treatment and her being a threat to Stanley's lifestyle is no reason for him to destroy her life. ...read more.