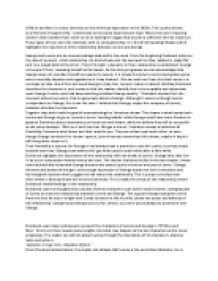 Steinbeck uses many techniques to present the characters of Lennie and George in Of Mice and Men.

﻿Of Mice and Men is a story centered on the American depression in the 1930?s. The country known as a?the land of opportunity,? is dismissed as it became deprived and inept. Many men were traveling workers that travelled from ranch to ranch looking for wages that would be sufficient till they moved on. These types of men were the loneliest, with no companionship. It is this brief traveling lifestyle which highlights the importance of the relationship between Lennie and George. George and Lennie are an unusual package deal within the novel. From the beginning Steinbeck enforces the idea of a parent ?child relationship. He distinctively sets the two apart as they ?walked in single file? and ?one stayed behind the other.? From first sight, a dynamic in their relationship is established. George is the one if front, revealing himself as the leader. As the story progresses we can acknowledge that George does not consider himself as superior to Lennie, it is simply his duty to control and guide Lennie who is mentally hopeless and regarded as a ?crazy bastard?. We can work out from this that Lennie is in no shape to take care of him and need George to help him. Lennie?s nature is almost childlike; Steinbeck describes the character in such a way so that the readers identify him to be incapable and dependent upon George ?Lennie, who had been watching imitated George exactly.? Steinbeck implies from the innocent actions by Lennie, that he genuinely admires George. ...read more.

The reader can also see that Lennie does not know his own strength: ?I pinched they?re heads a little and they was dead.? The reader can see that Lennie cannot judge his own strength. It empathises his animal instincts and ho w he is strong, but he does not know it. He will do whatever he thinks is best when he is in trouble, completely discarding the fact that he is in the civilised world. The reader gets an image of a bear trying to live with humans. This also foreshadows that Lennie will kill the pup and Curly?s wife. George is the man who looks after him, it is a weird pairing as they both act and look completely different: ?small, strong hands, slender arms.? Steinbeck describes George in detail to contrast the description of Lennie. This suggests that George is the civilised man of the pair. The fact that his body is developed mirrors his sharp brain. Thus, this is a complete contrast of the character of Lennie. George also has defined emotions, one of these is his short temper: ?Jesus Christ! You?re a crazy bastard!? This shows that George sometimes feels annoyed at the stupidity of Lennie. He loses his temper as he hits the limit on how much more of Lennie he can take. He feels Lennie is a burden and acts that way although secretly he needs Lennie?s companionship. This foreshadows that George slowly cannot cope and eventually will not be able to anymore. The reader can see that George and Lennie have a strange relationship. ...read more.

"You seen a girl around here?" he demanded angrily." (Page 39) She made him crazy and enjoyed it. So ultimately, neither one of them are very happy, it's a pretty unhealthy relationship. Steinbeck has presented Curly?s wife as a person who is frustrated to her life and lost all her wishes of being a scrumptious movie star. on the ranch she is presented like being frustrated, alone and trust less in her life and also she in not being respected by any one on the ranch, the people on the ranch just afraid of her to not be something wrong with her and they may not lose their job at all...! and she is really feeling solitude on the ranch with no wish in her life always looking for someone to talk with. Curly's wife is so lost, lonely and insignificant that Steinbeck does not even give her a name. She spends the novel trying to find company under the guise of looking for her husband. Curly is in fact an intensely abusive person with a major case of small-guy complex. The irony is that while she pretends to be looking for Curly, she is actually trying to avoid him. The men on the ranch fear Curly's wife. She is a temptress of sorts and she is a possession of Curly?s (hence her name). She projects undertones of sexuality in almost everything she says. The men are lonely which only highlights her danger. They do not want the bosses son, Curly, to get angry. They simply can't afford to lose their job during a depression. ...read more.