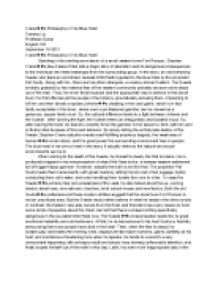 Crane��s Philosophy in The Blue Hotel Tianshu Liu Professor Durso English 102 September 18 2012 Crane��s Philosophy in The Blue Hotel         Standing in the swirling snow storm of a small western town Fort Romper, Stephan Crane��s blue Palace Hotel tells a tragic story of alienation and its dangerous consequences to the individual who feels estranged from the surrounding group. In the story, an odd-behaving Swede who fears an uncivilized, lawless Wild West is guided to the blue hotel by the proprietor Pat Scully. Along with him, there are two other strangers, a cowboy and an Eastern. The Swede is totally grabbed by his irrational fear of the western community probably as soon as he steps out of the train. Thus, he never finds his place and the appropriate way to behave in this small town. He first offences all the people in the hotel by groundlessly accusing them of planning to kill him and then directly exposes Johnnie��s cheating in the card game, which is in fact tacitly acceptable in this town, where even a professional gambler can be viewed as a generous, square family man. So, the cultural difference leads to a fight between Johnnie and the Swede.  After winning the fight, the Swede enters an antagonistic and boastful mood. So, after leaving the hotel, he dares to violently force the gambler in the saloon to drink with him and is finally killed because of this rash behavior. ...read more.

This is clearly a message of self-fulfilling prophecy. If the Swede was not so dogmatic about what was going to happen, and so obnoxious to all, he probably won��t have come to the end that he does.         But is that to say, the Swede is the only one who is responsible for his death? Not at all. Just like the Eastern indicates, everybody in the hotel is in it. ��Every sin is a result of collaboration (Crane, 577).�� The gambler is just the one that commits the final, fatal stab at the apex of the story; others, however, all directly or indirectly push the tragedy, or at least do hardly anything to stop it. Among them, Johnnie, who cheats in the card game, probably plays the biggest part. One can easily tell from the former quarrel between Johnnie and the old farmer that he does cheat when playing cards. However, he totally denies it and tries to prove his ��innocence�� by fighting with the Swede. This probably deepens the Swede��s hostile and aggressive feelings towards westerners. The Swede��s winning the fight makes things even worse. It adds unrivalled complacency and self-righteousness to his antagonism. Therefore, he is more likely to use violence. His boasting of his winning in the fight and violently ordering the gambler to drink with him, which later causes his death, is a distinct evidence. ...read more.

After entering the hotel, the Swede feels panic and anxiety, and actually wants to leave. It is the frantic wind, the whirling flakes and the turmoiling sea of snow that keep him inside because ��No island of the sea could be exempt in the degree of this little room with its humming stove (Crane, 571).�� The harsh environment forces everybody to stay inside the room. The howling wind seems to imply the antagonism and the up-coming violence between the men. Naturally, people inside start playing cards since it is the only entertainment available to kill time in this terrible weather. The Swede has no other choice but to join. Then the game leads to the quarrel, and quarrel results in the fight. This is perhaps how the tragedy begins. Later, after the Swede leaves the hotel, it is also the weather that forces him to find another shelter from the snow. Therefore, he is led to the saloon where he fights with the gambler and stabbed to death.         All in all, Stephan Crane uses this tragic story to uncover his naturalistic philosophy: a man himself has actually little control of his life. He is only part of it. The others, the surrounding environments, human��s inner nature, or even a small incident like a quarrel can have large influence on one��s destiny. Things happen in the blue hotel are actually happening all around us every day. Everyone is directly or indirectly responsible for what happens to people surround you. ...read more.