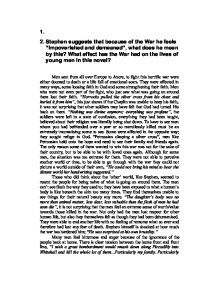 Stephen suggests that because of the War he feels &amp;#147;impoverished and demeaned&amp;#148;, what does he mean by this? What effect has the War had on the lives of young men in this novel?

1. 2. Stephen suggests that because of the War he feels "impoverished and demeaned", what does he mean by this? What effect has the War had on the lives of young men in this novel? Men sent from all over Europe to Ancre, to fight this horrific war were either doomed to death or a life full of emotional scars. They were affected in many ways, some loosing faith in God and some strengthening their faith. Men who were not even part of the fight, who just saw what was going on around them lost their faith. "Horrocks pulled the silver cross from his chest and hurled it from him", this just shows if the Chaplin was unable to keep his faith, it was not surprising that other soldiers may have felt that God had turned His back on them. "Nothing was divine anymore; everything was profane", the soldiers were left in a state of confusion, everything they had been taught, believed about their religion was literally being shot down. ...read more.

They were able to end another life with no feeling of remorse what so ever and therefore had lost any fear of death. Stephen himself is shocked at how much the war has hardened him; "He was surprised at his own brutality." Many men feel bitterness and anger because of the ignorance of the people back at home. There is clear tension between the home front and front line, "I wish a great bombardment would smash down along Piccadilly into Whitehall and kill the whole lot of them...Particularly my family. Particularly them." Some of the letters we are shown written by the men are not as sentimental as one would have expected them to be. Many men had become rather distant from their family, maybe because they did not want them to be exposed to what they had been, or because they despised them for not being able to understand what life is really like on the front line. We are shown a rather disturbing scene, when Weir arrives home. ...read more.

Life would never be the same again for those who did survive the war. Some even began to believe that it would be worse for them to survive with these memories, than die there and then. The soldiers could only take each day as it came, not being able to look beyond the next day, as each day was so unpredictable. "At the moment it seemed to Stephen to be the other way about: that this was the new reality, the world in which they were condemned to live, and that the pattern of the seasons, of night and day, was gone." Some may even have to continue their lives with a feeling of constant guilt if they were to survive. "What have we done," the men seem to naturally take responsibility for what really were their actions, but not their control. It is not surprising that they felt anger towards the futility of these actions, to the commands made by the officers and their mottoes; "when in doubt go forward". ...read more.