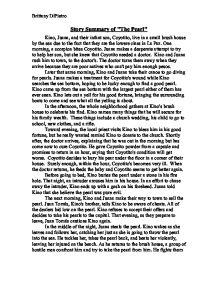 Story Summary of "The Pearl" Kino, Juana, and their infant son, Coyotito, live in a small brush house by the sea due to the fact that they are the lowere class in La Paz. One morning, a scorpion bites Coyotito. Juana makes a desperate attempt to try to help her son, but she knew that Coyotito needed a doctor. Kino and Juana rush him to town, to the doctor's. The doctor turns them away when they arrive because they are poor natives who can't pay him enough pesos. Later that same morning, Kino and Juana take their canoe to go diving for pearls. Juana makes a treatment for Coyotito's wound while Kino searches the sea bottom, hoping to be lucky enough to find a good pearl. Kino came up from the sea bottom with the largest pearl either of them has ever seen. Kino lets out a yell for his good fortune, bringing the surrounding boats to come and see what all the yelling is about. In the afternoon, the whole neighborhood gathers at Kino's brush house to celebrate his find. ...read more.

The next morning, Kino and Juana make their way to town to sell the pearl. Juan Tom�s, Kino's brother, tells Kino to be aware of cheats. All of the dealers bid low on the pearl. Kino refuses to accept their offers and decides to take his pearls to the capital. That evening, as they prepare to leave, Juan Tom�s cautions Kino again. In the middle of the night, Juana steals the pearl. Kino wakes as she leaves and follows her, catching her just as she is going to throw the pearl into the sea. He tackles her, takes the pearl back, and beats her violently, leaving her injured on the beach. As he returns to the brush house, a group of hostile men confront him and try to take the pearl from him. He fights them off, killing one and causing the rest to flee, but he drops the pearl in the process. As Juana ascends from the shore to the brush house, she finds the pearl lying in the path. ...read more.

Kino attempts to mislead the trackers by creating a false trail up the mountain. Then Kino, Juana and Coyotito hide in the cave and wait for an opportunity to escape back down the mountain. The trackers are slow getting up the mountain because of their horse. They finally arrive at the watering hole at dusk. They make camp, and two of the trackers sleep while the third stands watch. Kino decides that he must attempt to attack them before the moon rises. He strips naked to avoid being seen, and sneaks up to striking distance. Just as he prepares to attack, Coyotito lets out a cry, waking the sleepers. When one of them fires, Kino attacks the trackers and Kills them. Kino slowly realizes that the tracker's shot killed his son in the cave. The next day, Kino and Juana make their way back through town and through the brush houses. Juana carries her dead son over her shoulder. They walk all the way to the sea. At the shore, Kino pulls the pearl out from his clothing and takes one last look at it. Then, he flings the pearl back into the sea. The pearl had destroyed Kino's son and Kino's way of life. Brittany DiPietro ...read more.