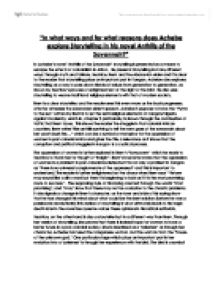 “In what ways and for what reasons does Achebe explore Storytelling in his novel Anthills of the Savannah?”

In Achebe’s novel “Anthills of the Savannah” storytelling is presented as a means to escape the effects of colonialism in Africa.  He presents Storytelling in many different ways: through myth and folklore, Beatrice, Ikem and the Abazonian elder and it is clear to the reader that storytelling plays an important part in Kangan. Achebe also explores storytelling as a way to pass down historical values from generation to generation, as shown by Beatrice’s process of enlightenment at the sight of the bird. He also uses storytelling to weave traditional religious elements with that of modern society.

Ikem is a clear storyteller, and the reader sees this even more as the book progresses, after he witnesses the Abazonian elder’s speech. Achebe’s purpose to have the “Hymn to the sun” written by Ikem is to set the semi-religious elements of Kangan/Nigeria, against modernity, which in, chapter 3 particularly, is shown through the combustion of traffic that Ikem faces.  This shows the reader the struggle in Post-colonial African countries. Ikem writes “like anthills surviving to tell the new grass of the savannah about last year’s bush fire....” which can be a symbol or metaphor for the oppression of women in post-colonial Africa and gives the title a relevance as it shows that the corruption and political struggles in kangan  is a cyclical process.

The oppression of women is further explored in Ikem’s “love poem” which he reads to Beatrice to thank her for the gift of “insight”. Ikem’s love letter states that the oppression of women is a problem in post-colonial societies but it is not only a problem in Kangan as “there is no universal conglomerate of the oppressed” and this is important to understand. The reader is further enlightened on the chaos when Ikem says “ Reform may sound like a dirty word but then it is beginning to look as if it is the most promising route to success,”.  The supposing style of his saying created through the words “most promising”, and “may” show that there may not be a solution to the chaotic problems. It also signals a change in Ikem’s character, as the tone and style of his saying show that he has changed his mind about what could be the best solution (before he was a passionate revolutionist).This version of storytelling is what ultimately leads to his tragic death later in the novel because he voices these opinions in his radical editorials.

Beatrice, on the other hand is also a storyteller but in a different way than Ikem. Through her version of storytelling, she proves that there is indeed hope for women to have a better future in a post-colonial society. She is described as a “priestess” as through her character, Achebe has fused the Kanganese woman and the woman from the “house of the unknown god.” One particular stage which plays an important part in her evolution into a “priestess” is through her experience with the bird. The bird is a symbol for the fact that the effects of colonialism are starting to be evident. This is because even the bird is given a colonial voice, through an English proverb taught to her by her mother: “Is the king’s property correct?” and this questions whether the political government in place after colonialism is right. This has allowed Beatrice to realise the struggle between the African and English culture. The reader sees her assuming the role of “Priestess” more frequently as the novel progresses as she connects to the culture of Africa. She learns the story of “Idemili” a goddess in the African myth and although she does not know the story, she herself grows into a wiser and more compassionate woman, emphasising her evolution into a “priestess”. In chapter 16, just before Chris’ departure to Abazon, he spends one last night with Beatrice, and in this particular chapter, she exerts a “jest of godessy” which Chris is attracted to. Her “jest” as a goddess gives a sense of religious ritual to their intimacy, and her role is further reinforced when they talk about the “bedbug’s excuse” as Beatrice is weaving traditional elements of African culture with that of post-colonial Africa, and through this Achebe is exploring storytelling as being everlasting.

The notion that the “story is everlasting” is further explored through the Abazonian elder’s speech. He speaks at great length about the power of storytelling and tells the Abazon community a story of the “Tortoise and Leopard” which can be interpreted as a metaphor for the struggle between Sam and Abazon. Here he is conveying that the people of Abazon need to have a voice in the political regime. He goes on to say “Because it is only the story that can continue beyond the war and the warrior . . . The story is our escort; without it, we are blind,” and this shows how through storytelling, a community can retain its history and tradition and how it can seek advice on how society can progress in the future. This is why storytelling is everlasting.

Ikem however, contrasts this view in his lecture at the University of Bassa, and expresses through the same story of the “tortoise and the leopard” that the role of a writer is to ask questions and not suggest solutions to them. The idea that “Storytellers are a threat” is shown as the power of writing manifests into a threat for Ikem, who is later taken away in the middle of that night and is shot and killed, and thus, another view with which Achebe explores storytelling with.

Overall, storytelling is a major technique which Achebe uses, emphasising the novel’s purpose, to question the political regime that is in place in post-colonial African society and this is why storytellers are perceived as a threat. As Ikem, Achebe’s alter-ego says, the role of the writer is not to propose solutions to problems in post-colonial Africa. However, the “story is everlasting” as it allows a community who is struggling to maintain it’s History and tradition, and perhaps, even seek guidance on how to progress in the future. Achebe has used 2 very contrasting views on storytelling in order for the reader to gain a deeper insight into the events of the novel. His reason to explore storytelling links back to the multi-narrative structure employed in this novel, which shows that people must take into account different views in order to both question the problems in post-colonial Africa and find solutions to them.