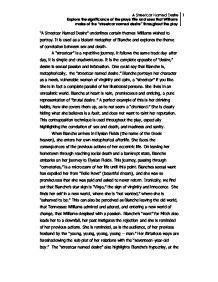 "A Streetcar Named Desire" underlines certain themes Williams wished to portray. It is used as a blatant metaphor of Blanche and explores the theme of correlation between s*x and death. A "streetcar" is a repetitive journey, it follows the same track day after day, it is simple and unadventurous. It is the complete opposite of "desire," desire is s****l passion and infatuation. One could say that Blanche is, metaphorically, the "streetcar named desire." Blanche portrays her character as a meek, vulnerable woman of virginity and calm, a "streetcar" if you like. She is in fact a complete parallel of her illustrated persona. She lives in an unrealistic world. Blanche at heart is vain, promiscuous and enticing, a pure representation of "brutal desire." A perfect example of this is her drinking habits, how she covers them up, as to not seem a "drunkard." She is clearly hiding what she believes is a fault, and does not want to taint her reputation. ...read more.

Blanche's "want" for Mitch also leads her to a downfall, her past instigates the rejection and she is reminded of her previous actions. She is reminded, as is the audience, of her previous husband by the "young, young, young, young - man." Her flirtatious ways are foreshadowing the sub-plot of her relations with the "seventeen-year-old boy." The "streetcar named desire" also highlights Blanche's hypocrisy, at the end of the play she is removed from social society completely, due to this pursuit of "desire." Pursuit of s*x affects many of Blanche's familiars, her husband is the perfect example. Allan Grey is confused and disorientated about his sexuality. When Blanche breaks in on him and a lover, he kills himself, because of her disapproval and remorse. This pursuit of "desire" leads to his death. She also refers to her ancestor's death being due to their "epic fornications." ...read more.

The first is merely a sign of authority, reminding Blanche she is in his "territory," the second is more invasive and Blanche begs him to "close the curtains." His indecency and improper actions are caused through his subconscious "desire." Stanley assumes his s****l dominance is over all women and cannot understand why a woman of Blanche's s****l explicitness and calibre would not want to sleep with him, and is shocked that she will not share his "loving-cup." The r**e scene triggers Blanche to become insane. It is not the initial act, but that fact that it happened by a man that Blanche has no consideration or respect for, this eventually drives her to insanity. Once again, although in a different form, it is "desire" that forces Blanche away from a home. ?? ?? ?? ?? A Streetcar Named Desire Explore the significance of the plays title and uses that Williams make of the "streetcar named desire" throughout the play 1 ...read more.