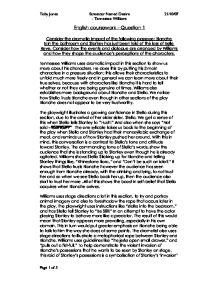 English coursework - Question 1 Consider the dramatic impact of the following passage: Blanche Is in the bathroom and Stanley has just been told of the loss of Belle Reve. Consider how the events and dialogue are arranged by Williams and how they shape the audience's perceptions of the characters. Tennessee Williams uses dramatic impact in this section to show us more about his characters. He does this by putting his 3 main characters in a pressure situation; this allows their characteristics to unfold much more freely and in general we can learn more about their true selves, because with characters like Blanche it is hard to tell whether or not they are being genuine at times. Williams also establishes more background about Blanche and Stella. We notice how Stella Trusts Blanche even though in other sections of the play Blanche does not appear to be very trustworthy. The playwright illustrates a growing confidence in Stella during this section, due to the arrival of her older sister. ...read more.

Williams uses guidelines like "he jerks open small drawer," and "pulls out a fist-full." To help demonstrate the violent invasion of Blanche's possessions that he wants to be seen by Stanley on stage. This raid of Stanley's possessions is a symbolisation of Stanley's 'invasion' of Blanche is used to show that Stanley's dominance prevails. It is also a way of giving the audience a little taste of what to expect later on in the play, when Stanley does in fact r**e Blanche. Williams also uses stage directions in order to reveal a symbolism of the capitalist and northern invasion into the southern way of life. The playwright portrays this through Stanley, whilst Blanche is a symbol of the Southern way of life. Blanche is also being used as a representative of are born into wealth and a higher class. We get these impressions when we learn that Stanley had been a member of the army, and he most likely used this to gain residency into the United States. ...read more.

Throughout this section, Williams gives the audience the privilege of knowing that Blanche can hear everything Stanley and Stella are saying, even thought the couple are not aware themselves. This dramatic irony is in direct contrast to Blanche's attitude when she comes out of the bath, because the acts as if everything is going fine. The playwright gives Stanley the line "Solid Gold Dress!" This exaggeration hints that the dress is fake which is a symbol of the fakeness about blanche. This fakeness takes the trust that was built up by Stella away from Blanche. So all in all, the dramatic impact that Tennessee Williams presents in this section, helps us to understand characters. He uses Stella's trust in Blanche to give the audience more faith in Blanche. The playwright also portrays Stanley as being a more nasty person, and shows that he is not just trying to act tough, this also allows the audience to trust Blanche more. ?? ?? ?? ?? Toby Jones Streetcar Named Desire 21/10/07 - Tennessee Williams Page 1 of 3 ...read more.