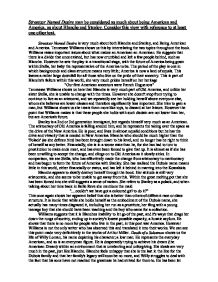 Streetcar Named Desire may be considered as much about being American and America, as about Blanche and Stanley. Consider this view with reference to at least one other text.

Streetcar Named Desire may be considered as much about being American and America, as about Blanche and Stanley. Consider this view with reference to at least one other text. Streetcar Named Desire is very much about both Blanche and Stanley, and Being American and America. Tennessee Williams shows us this by interrelating the two topics throughout the book. Williams raises important issues about what makes an American an American. He suggests that there is a divide that once existed, but has now crumbled and left a few people behind, such as Blanche. However he sets the play in a transitional stage, with the future of America being gown within Stella, her baby the representative of the America to be. The period of the play is one in which backgrounds and class structure means very little; America is now a land of equals. This leaves a rather large downfall for all those who live on the pride of their ancestry. This is part of Blanche's failure within this world, she very much prides herself on her heritage "Our first American ancestors were French Huguenots" Tennessee Williams shows us here that Blanche is very much part of Old America, and unlike her sister Stella, she is unable to change with the times. ...read more.

Financially, she is in a worse state than he, for she has had to turn to prostitution to make ends meet, and has even been forced to give that up. It is almost as if she has been unwilling to accept the change, and clings on to Old America as it slowly sinks. In comparison, we see Stella, who has effectively made the change from aristocracy to meritocracy and has begun to form the future of America with Stanley. She has realised the Dubois name means little in this world, either financially or status, and has left it behind in marring into the Kowalskis. Blanche appears to slowly destroy herself through the book. Her attitude is still very aristocratic, and she seems to be unable to get away from this. Within the great melting pot that she has been forced into she still suggests a sense of r****m. She refers to Stanley as a polack, and when talking about her time back in Belle Reve she mentions the maid "....couldn't we have got a coloured girl to do it?" ...read more.

within an environment that is unrelenting and unforgiving. His ideals are very much in the past, just like Blanche. Blanche feels unhappy that she is the last in the line for the Dubois family and that her family's legacy will soon be no more, and w***y struggles to deal with the fact that his sons have not reached the greatness he had strived for them to. He has been let down by the dream, as the New America has taken over. This is also shown with his house, enclosed by the modernisation of blocks of buildings of New America, leaving his little house (his last remaining element of Old America) blocked from view, of what can arguably be called, life. We often see the characters, similarly drift off into their own word of their pasts. w***y sees Uncle Ben and his boys when they were younger (in the good old days), and Blanche continuously hears the Varsuviana and towards the end imagines an old fling form the past coming back. They both fail to accept the reality in which they live and both end up in tragedy, with Blanche being committed and w***y taking his own life with no end gain. They both become victims of the failed American Dream. ...read more.