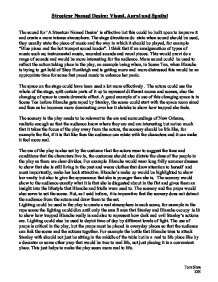 Streetcar Named Desire: Visual, Aural and Spatial The sound for 'A Streetcar Named Desire' is effective but this could be built upon to improve it and create a more intense atmosphere. The stage directions do state when sound should be used, they usually state the piece of music and the way in which it should be played, for example "Blue piano and the hot trumpet sound louder". I think that if an amalgamation of types of music such as; instrumental music, recorded sounds and vocal pieces. This would provide a range of sounds and would be more interesting for the audience. More sound could be used to reflect the action taking place in the play, an example being when, in Scene Ten, when Blanche is trying to get hold of Shep Huntleigh and is getting more and more distressed this would be an appropriate time for some fast paced music to enhance her panic. The space on the stage could have been used a lot more effectively. The actors could use the whole of the stage, split certain parts of it up to represent different rooms and scenes, also the changing of space to create dramatic effect. ...read more.

Lighting could also be used to depict time of day by different levels of light. The use of props is critical in the play, but the props must be placed in everyday places so that the audience can link the scene and the actions together. For example the bottle that Blanche tries to attack Stanley with should not just be sitting in the middle of the table but in a real to life place like by a decanter or some other prop that would be true to real life, not just placing it in a convenient place. This just helps to make the play seem more real to life. The play should be performed on a large stage with multiple levels so that the sense of a larger space can be created, it should also have divisions so that rooms can be defined. This is critical to the pace of the play because for example on Scene Three the action is fast paced and moves between the rooms, if the set had to be changed every time the stage had to be changed the pace would be lost, a revolving stage may be an option to help with the flow of the play. ...read more.

The background music is very in keeping with the era of the play, the blue piano echoes of the 1940's America scene, this music is contrasted by the polka tune that plays in Blanche's head, this music does not fit in with the scene and signals to the audience that something is wrong, the music is used every time to build up suspense. If I had to choose introductory music I would choose something that was in keeping with the era, something that could have been heard on a wireless at the time but something that is soft and could be lowered during the action and left on throughout the scene. The stage directions are very useful in that they give the director an idea of how Williams wants the play to be performed. Unfortunately they are quite limited and they would have to be expanded on to keep the realism going for they do not provide detailed enough directions, this might be because Williams wanted the actors performing the play to think for themselves and act as they would act if put in those situations. This might be to create another level of realism in that the actors would be performing real to life. ?? ?? ?? ?? Tom Shea 12E ...read more.