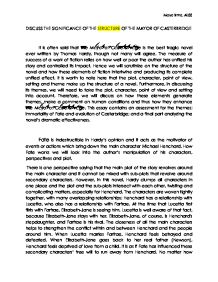 Structure of the Novel The Mayor of the Casterbridge

DISCUSS THE SIGNIFICANCE OF THE STRUCTURE OF THE MAYOR OF CASTERBRIDGE It is often said that The Mayor of Casterbridge is the best tragic novel ever written by Thomas Hardy, though not many will agree. The measure of success of a work of fiction relies on how well or poor the author has unified his story and controlled its impact. Hence we will scrutinize on the structure of the novel and how these elements of fiction intertwine and producing its complete unified effect. It is worth to note here that the plot, character, point of view, setting and theme make up the structure of a novel. Furthermore, in discussing its themes, we will need to take the plot, character, point of view and setting into account. Therefore, we will discuss on how these elements generate themes, make a comment on human conditions and thus how they enhance The Mayor of Casterbridge. This essay contains an assessment for the themes: immortality of Fate and evolution of Casterbridge; and a final part analyzing the novel's dramatic effectiveness. Fate is indestructible in Hardy's opinion and it acts as the motivator of events or actions which bring down the main character Michael Henchard. How Fate works we will look into the author's manipulation of his characters, perspectives and plot. ...read more.

Hardy is always deeply conscious, however, of the process of change itself and many of the relics or methods of earlier days which are constantly being swept away. Thus, we are then presented with Farfrae, who comes into the village with a reason-and-modern thinking. When he enters Henchard's company, he uses intelligence and his logic to upgrade the business. He has a very sharp mind and writes every transaction in ledger books. While Henchard makes deals with handshakes, Farfrae makes them with contracts. There is also a gossip about how Farfrae has saved Henchard's business by introducing modern methods such as "ciphering and mensuration" - instead of the old-fashioned chalk strokes and measurements that Henchard has always used. When Henchard's business flourished in wealth, it becomes obvious that Farfrae's methods in handling business is far better than Henchard and people are turning more to him now. Here Hardy wants us to focus on seeing who has more advantage than the other. Henchard is figuratively frail and he needs to step aside to make way for a younger man with fresh and effective ideas to take control of things in order to make progress. While Henchard's influence to the village gets weaker and weaker, Farfrae develops rapidly without pause. All of Henchard's wealth and possessions are transferred to Farfrae, including the mayoralty. ...read more.

We might think of the plot in terms of five descending lines, marking the downward movements in Henchard's fortunes. With these, the readers are moved to tears, sympathize Henchard for Hardy's deterministic nature in putting Henchard down. Apart from that, the chapters are short with a lot of action packed into each of them. Many of the chapters are filled with dramatic scenes, especially the ones in the courtroom where the 'furmity woman' exposes Henchard's past, where Henchard is reading his letters aloud to Farfrae, where the skimmity-ride takes place, and where Henchard attempts at a reconciliation with Elizabeth-Jane on her wedding day. Each of these scenes is filled with a sense of pathos to draw the tragic novel together. In conclusion, no matter how the plot develops, it certainly creates a drama of tragedy and emulsifies the emotions of the readers into a feeling of sadness yet shocking. To cap it all, Thomas Hardy is capable of creating a tragic (if not most) novel of its time, with his brilliant use of dualisms such as rise and fall. The rise of a society, the evolution of Casterbridge, costs the fall of an individual, Henchard. Then, modernism is slowly taking over the old conventional ways. In other words, the elements of The Mayor of Casterbridge's structure synchronize well, thus creating a symphony of tragedy. ?? ?? ?? ?? Maya Irma, AL85 ...read more.