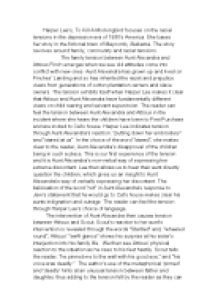 ﻿Harper Lee?s, To Kill A Mockingbird focuses on the racial tensions in the depression era of 1930?s America. She bases her story in the fictional town of Maycomb, Alabama. The story revolves around family, community and racial tensions. The family tension between Aunt Alexandra and Atticus Finch emerges when we see old attitudes come into conflict with new ones. Aunt Alexandra has grown up and lived on Finches? Landing and so has inherited the r****t and prejudice views from generations of cotton plantation owners and slave owners. The tension exhibits itself when Harper Lee makes it clear that Atticus and Aunt Alexandra have fundamentally different views on child rearing and servant supervision. The reader can feel the tension between Aunt Alexandra and Atticus in the incident where she hears the children have been to First Purchase and are invited to Cal?s house. Harper Lee indicates tension through Aunt Alexandra?s reaction: ?putting down her embroidery? and ?stared at us?. In the choice of the word ?stared?, she makes clear to the reader, Aunt Alexandra?s disapproval of the children being in such a place. This is our first experience of the tension and it is Aunt Alexandra?s non-verbal way of expressing her extreme discontent. Lee then allows us to hear their aunt directly question the children, which gives us an insight to Aunt Alexandra?s way of verbally expressing her discontent. ...read more.

Through the author?s language, it is clear that the mood is tense and the atmosphere menacing. The sentence ?four dusty cars moving slowly in a line,? adds effect to the tense scene that is about to unfold. ?Dusty,? suggesting the dry heat and the dark oppressive mood.? This sentence also gives the reader a sense of the mood of the situation. The fact that they move, ?Slowly,? suggests purpose in the men, and also the dark intent of the men inside the cars. The varied sentence structure consisting of long sentences and the deep description of the scene allows the reader to sense the tension in the situation. The short sentence, ?Nobody got out.? suggests tension again. This suggests anticipation, and again allows the reader to realise that the situation is very tense. The way in which Harper Lee describes Atticus?s physical reaction to the men?s arrival shows us that he was expecting them, and that he is calm in this situation. When he folded the paper ?deliberately,? she makes clear that he is taking his time and the phrase, ?hat to the back of his head,? suggests that he is analysing and thinking about the situation and what the best course of action would be. The way in which Harper Lee describes the men exiting their vehicles also adds to the tension. ?In ones and twos? which gives the reader the impression of a menacing group of men. ...read more.

The dreamlike quality and Judge Taylor?s ?far away?,? tiny,? voice suggests for the reader the degree of uneasiness surrounding the verdict. The arrival of the jury, and Scout?s revelation that they fail to make eye contact with Tom, further intensifies the tension in the courtroom and for the reader, ends what hope we have for Tom Robinson?s victory in this court case. It is through the repetition of ?handed? and the use of ellipsis in the giving of the verdict, that highlights the reader to the seriousness of the situation. As Harper Lee describes Jem?s physical reaction to the verdict being given, the reader feels a sense of how unjust the verdict really is. The use of the onomatopoeia, ?snapped? and the sharp sound of ?shut,? draws the attention of the reader fully to Atticus? unease. The Chapter closes with Atticus walking quickly, towards the exit and the reader again, senses the tension between Atticus, and the white people of the community. The reader is clear that it is indeed, a ?lonely walk.? The isolation that Atticus feels as he hurries out, contrasts sharply with the quiet respect of the Black community as they stand in admiration and appreciation for a white man who treats a Black man as his equal. In conclusion, the reader is in little doubt about the various tensions which run through the novel and which work to draw attention to Harper lee?s purpose, which is to reveal the realities, and injustices of life in the deep south of 1930?s America. ...read more.