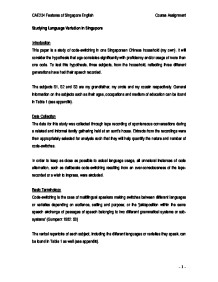 Studying Language Variation in Singapore Introduction This paper is a study of code-switching in one Singaporean Chinese household (my own). It will consider the hypothesis that age correlates significantly with proficiency and/or usage of more than one code. To test this hypothesis, three subjects, from the household, reflecting three different generations have had their speech recorded. The subjects S1, S2 and S3 are my grandfather, my uncle and my cousin respectively. General information on the subjects such as their ages, occupations and medium of education can be found in Table 1 (see appendix). Data Collection The data for this study was collected through tape recording of spontaneous conversations during a relaxed and informal family gathering held at an aunt's house. Extracts from the recordings were then appropriately selected for analysis such that they will help quantify the nature and number of code-switches. In order to keep as close as possible to actual language usage, all unnatural instances of code alternation, such as deliberate code-switching resulting from an over-consciousness of the tape-recorded or a wish to impress, were excluded. Basic Terminology Code-switching is the case of multilingual speakers making switches between different languages or varieties depending on audience, setting and purpose; or the 'juxtaposition within the same speech exchange of passages of speech belonging to two different grammatical systems or sub-systems' (Gumperz 1982: 59) The verbal repertoire of each subject, including the different languages or varieties they speak, can be found in Table 1 as well (see appendix). ...read more.

Auntie Winnie don't know what is "chio" (pretty in Hokkien) la. You ar, very ba gua (nosey in Mandarin) one, know all the gossips about all the ming xing (actresses in Mandarin). (to girlfriend) Winnie, "chio" (pretty in Hokkien) hai "leng loi" (pretty girl in Cantonese). I was calling her "bart guat" (nosey in Cantonese) Because she knows everything about the celebrities. Gossip Queen! S2: (to girlfriend) "pontang school" means to skip school without any excuse. S2: (to my aunt) Cannot make it la, no taste. (to girlfriend) She has really a really bad dress sense, don't you think? Topic In this case, my uncle was telling us about his recent trip to Shanghai. He was looking for a toilet and when he asked for one, the Shanghainese could not understand him. S2: In Shanghai, toilet is not "chi suo"(toilet in colloquial Mandarin). You have to ask for the "mao chi" (toilet in Shanghainese). In another case, when my grandfather was on the topic of the Taiwanese singer Teresa Teng, my uncle suggested my cousin play one of her songs- "The Story of a Small Village." S2: Play your mum's favourite la. Deng Li Jun's Xiao Chang Gu Shi (Teresa Teng's "The Story of a Small Village.") In another case, he suggested we go to Crystal Jade restaurant for lunch the next day. S2: Let's go Crystal Jade. They have really good "Sui Jing Baos" (Pork Dumplings) Situation There were situations when my uncle spoke in English because he did not want my grandmother to know the contents of the conversation. ...read more.

Hence, the hypothesis that age correlates significantly with proficiency and usage of more than one code might not necessary hold in view of the study I have carried out. However, I would like to suggest that proficiency and usage of codes are not only dependent on age, but also on the education level of the subject, the type of education he received (English-medium or non-Englsih medium) and most importantly, his social network. I learnt the concept of network analysis in Milroy's 1980 Belfast study and based on my findings, I feel that a network analysis would help to achieve a more insightful understanding of code-mixing. By definition, network analysis focuses on the various kinds of social contacts that actors establish in the course of their regular routines and on the norms governing behaviors in these contacts. As we can see from my findings, S2 has had an English-medium education and is therefore proficient in English. Moreover, he has a wider job scope which requires him to meet with people from all walks of life and from different countries, speaking different languages. Thus, he has had to opportunity to pick up many different varieties and codes. Due to business dealings, he has to learn to be proficient in many of these languages as well, making him the one (out of the three) who has the most significant proficiency level in terms of usage of different codes. The oldest S1, on the other hand, has a much smaller social network, explaining his lack of proficiency in the codes even though he has a rather large verbal repertoire. ...read more.