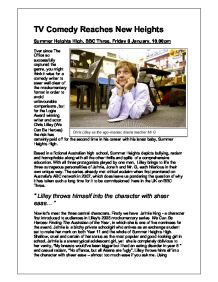 TV Comedy Reaches New Heights Summer Heights High, BBC Three, Friday 8 January, 10.00pm Ever since The Office so successfully captured the genre, you might think it wise for a comedy writer to steer well clear of the mockumentary format in order to avoid unfavourable comparisons, but for the Logie Award winning writer and actor Chris Lilley (We Can Be Heroes) the risk has certainly paid off for the second time in his career with his latest baby, Summer Heights High. Based in a fictional Australian high school, Summer Heights depicts bullying, r****m and homophobia along with all the other thrills and spills of a comprehensive education. With all three protagonists played by one man, Lilley brings to life the three outrageous personalities of Ja'mie, Jonah and Mr. G, each hilarious in their own unique way. The series already met critical acclaim when first premiered on Australia's ABC network in 2007, which does leave us pondering the question of why it has taken such a long time for it to be commissioned here in the UK on BBC Three. ...read more.

Using extremely well-observed tendencies of teenagers: "public schools are like so random!", Lilley has clearly done his research - are there any words that are more overused by young people than "like" and "random"? " ...brilliantly crafted comedic entertainment " Then there's Jonah Takalua, a 13 year-old bully from Tonga. Having been expelled from his last two schools and now at his third in eighteen months, Jonah has attention deficit disorder. He is disruptive in class, educationally challenged and has anger issues. Jonah leads a breakdancing crew with his other Polynesian friends who are collectively known as 'The Islander Boys'. Despite his appalling behaviour and complete lack respect for any of his teachers, Jonah's reaction to his punishments, "Puck you sir!" and "Have you got your period or what miss?" as well as his belief that his punishments are in fact r****t attacks against him, provide brilliantly crafted comedic entertainment. ...read more.

With Lilley not having to rely on overused Aussie clich�s like "G'day" or "Good on you mate", his enthusiasm for comedy stills shines through with global appeal. Although it is not for the easily offended, with no subject being too taboo for Lilley, the series has certainly brought a breath of new life to BBC Three and makes a pleasant change from the channel's usual Friday night drivel of 'Two Pints of Toilet Humour and a Canned Laughter Track'. From the vain, high maintenance caricature of Ja'mie and the outrageous, high octane behaviour of Jonah, to the high hopes of Mr G as the next director, producer and star of the show, Summer Heights High with its heavy mix of life's realities and absurdities is certainly high-ranking on my list of nominees for the 2010 comedy awards. The best thing: So convincing are the characterisations that before long you find yourself unaware that all three are played by the same person. The worst thing: The character of Ja'mie does get a little repetitive after a while. The verdict: Reviewer: ?? ?? ?? ?? ...read more.