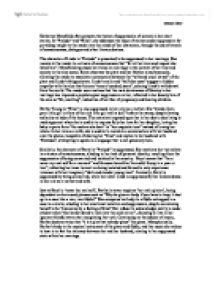 Katherine Mansfield often presents the theme of suppression of women in her short stories. In "Prelude" and "Bliss", she addresses the issue of women under suppression by providing insight to the reader into the minds of her characters, through the use of stream of consciousness, dialogue and other literary devices. The character of Linda in "Prelude" is presented to be suppressed in her marriage. She reveals to the reader in a stream of consciousness that "for all her love and respect she hated him". Mansfield expresses her views on marriage in the context of her time and society in the aloe scene. Kezia observes the plant and her Mother simultaneously, allowing the reader to associate a connection between the "withered cruel leaves" of the plant and Linda's fatigued state. Linda's smile and "half shut eyes" suggest a hidden empathy with the aloe that blooms "once a hundred years", echoing Linda's withdrawal from the world. The reader soon realizes that the male dominance of Stanley in her marriage has imposed a psychological suppression on her, reflected in her description of the aloe as "fat, swelling", indicative of her fear of pregnancy and bearing children. ...read more.

year or two", reflecting her inner turmoil on being isolated and forced to only experience romance with her imaginary "dark and slender young man". Ironically, Beryl is suppressed by being unmarried, while her sister Linda is suppressed by her awkwardness in her role as a mother and wife. Just as Beryl is 'never her real self', Bertha is never acquires 'her real opinion', being dependant on borrowed phrases such as "Why be given a body if you have to keep it shut up in a case like a rare, rare fiddle?" She compares her body to a fiddle entrapped in a case in a simile, alluding to her emotional isolation and suppression, despite convincing herself to be "overcome by a feeling of bliss" Her refusal to acknowledge reality is made evident when "she hardly dared to look into the cold mirror", choosing to live in her ignorant blissful state over recognizing the truth. Continuing on the subject of music, Bertha declares twice that "it is a pity that nobody plays" the piano. ...read more.

Mansfield satirizes the artistic middle class of her time through the portrayal of Bertha's "modern, thrilling friends". At the dinner party, the dialogue between the guests allows the reader to conclude that Bertha lives in a mundane society, where topics such as "the dreadful experience of driving through eternity in a timeless taxi", or how "tomato soup is so dreadfully eternal" is often discussed. The absurd conversations between Bertha's guests who she considers to be "so keen on social questions and modern" reflect the restraints of living in her superficial and mundane society. The abrupt ending of "Bliss" with the pear tree "standing as lovely as ever and still" compels the reader to question whether Bertha breaks free from her suppression upon realizing the emptiness of her marriage and life, reflecting Mansfield's ideas that people don't always learn from their realizations. By providing her readers insight into the minds of her characters, Mansfield explores the theme of suppression of women in her short stories. By the end of her short stories "Prelude" and "Bliss", she encourages her readers to contemplate on the nature of bliss, fear, and ultimately suppression. Miriam Chew ...read more.