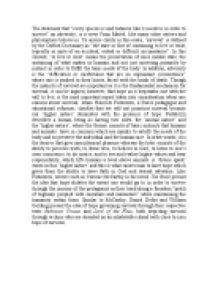 Survival as a theme in &quot;The Road&quot; and two other works. Similar to McCarthy, Daniel Defoe and William Golding present the idea of hope governing survival through their respective texts Robinson Crusoe and Lord of the Flies,

﻿The statement that ?every species is and behaves like it needs to in order to survive? an adversity, is a view Yann Martel, like many other writers and philosophers believe in. To ensure clarity in this essay, ?survival? is defined by the Oxford Dictionary as ?the state or fact of continuing to live or exist, typically in spite of an accident, ordeal or difficult circumstance?. In this context, ?to live or exist? means the preservation of ones mental state; the sustaining of what makes us humans and not just surviving primarily by instinct in order to fulfill the basic needs of the body. In addition, adversity is the ?difficulties or misfortunes that are an unpleasant circumstance? where one is pushed to their limits, faced with the brink of death. Though the instincts of survival are important as it is the fundamental mechanism for survival, it can be argued, however, that hope as it bequeaths one with the will to live, is the most important aspect taken into consideration when one reasons about survival. Johan Heinrich Pestalozzi, a Swiss pedagogue and educational reformer, clarifies that we will not prioritise survival because our ?higher nature? dominates with the presence of hope. Pestalozzi describes a human being as having two sides, the ?animal nature? and the ?higher nature?, where the former consists of basic instincts that humans and animals have in common which are mainly to satisfy the needs of the body and so preserve the individual and the human race. In order words, it is the desires that give man physical pleasure whereas the later consists of the ability to perceive truth, to show love, ...read more.

The charred bodies and tattooed skulls, that the protagonists of The Road, ?The Man? and ?The Boy? come across illuminates the degeneration of mankind which has surmounted itself in the scarring of the human body ? nothing is sacred anymore and the Earth has become a place where men eat other men. In essence, humanity has lost its humaneness and civilisation has collapsed. Comparatively, the extinction of ?civilisation? is also seen through the characteristics of Jack Meridew in The Lord of the Flies as he hungers for ?meat? and craving for power, leads the group of boys into anarchy and feels indifferent about the deaths of Simon and Piggy even though he is the leading cause. The ?bad guys? from The Road, enslave the meek, consume their children, and torture and butcher anything that gets in their way; showing degradation into the ?animal nature? as theirs is the domain of survival at any cost, just like Jack. In my opinion, the ?bad guys? do not truly survive as give up their humanity and renounce their ?higher nature?, becoming no different from animals; losing all sense of human qualities and living only based on instinct. In Robinson Crusoe, the lost of ?cavilisation? and humanity is not depicted as there are no ?bad guys?. The reason may be due to the 18th century belief that the human nature is endowed with a innate sense of natural compassion prior to reasoning; hence mankind was though to be naturally good as Jean-Jeacques Rousseau explains in his book ?Discourse on the Moral Effects of Science?, published in 1749. ...read more.

Without hope, there will only be a melancholic future as hope gives men something to fight for, it prevent them from giving up; ?this is what good guys do, they keep trying. They don?t give up?. Lord of the Flies conveys this melancholic world without hope well as when ?civilisation? on the island fails and hope is lost, the savages began to kill and hunt those who do not follow them, including Ralph and Piggy. In opposition to Friedrich Nietzsche who explains that ?hope in reality is the worst of all the evils because it prolongs the torment of men?, hope does not prolong the ?torment? but makes the ?torment? bearable as they have something to live for. The reason why the protagonist we?re able to survive their respective ordeals is because they had hope. Without hope, they would?ve perished like the rest who are in a similar situation. Men, like Robinson Crusoe, are only able to make it through their ordeal solely because they have hope. In conclusion, as Friedrich Nietzsche puts it, ?he who has a why to live can bare almost anyhow?. Hope is the ?why? that enables humans to bear the pangs of adversity. Without hope, we will basically resort back to animals, living based on instinct. It is hope which preserves our humanity and governs the extent we go to in order to survive, illuminating the bleakest of hours. Therefore, with the use of setting, characterisation as well as symbolism, McCarthy, Defoe and Golding has shown the importance of having hope through their respective texts. (2732 words) ...read more.