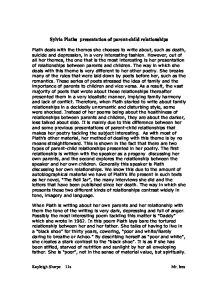 Sylvia Plaths presentation of parent-child relationships Plath deals with the themes she chooses to write about, such as death, suicide and depression, in a very interesting fashion. However, out of all her themes, the one that is the most interesting is her presentation of relationships between parents and children. The way in which she deals with this theme is very different to her other poetry. She breaks many of the rules that were laid down by poets before her, such as the romantics. These series of poets stressed the idea of family and the importance of parents to children and vice versa. As a result, the vast majority of poets that wrote about these relationships thereafter presented them in a very idealistic manner, implying family harmony and lack of conflict. Therefore, when Plath started to write about family relationships in a decidedly unromantic and disturbing style, some were shocked. Instead of her poems being about the healthiness of relationships between parents and children, they are about the darker, less talked about side. ...read more.

When Plath is writing about her own parents and her relationship with them the tone of the writing is very dark, depressing and full of anger. Possibly the most interesting poem tackling this matter is "Daddy" which she wrote in 1962. In this poem Plath lays bare the tortured relationship between her and her father. She talks of having to live in a "black shoe" for thirty years, cowering, "poor and white/Barely daring to breathe or Achoo." By describing herself as "poor and white", she creates a stark contrast to the "black shoe". It is as if she has been stifled, starved of nutrition and sunlight by her all enveloping father. She is "poor", not in the sense of material value, but spiritually. She has had all feeling and emotion sapped from her by the presence of her father. The strange childhood imagery in the echo of the well-known nursery rhyme ("The Old Woman Who Lived in a Shoe") ...read more.

Her usage of "chuffed" obviously refers to the Nazi's transport of the Jews to the death camps by train, but it also harks back to the childhood imagery, in that it is a very childish word with associations childhood games. Despite all this anger, Plath still voices a wish to rejoin him. She was "ten when they buried (him)", and mentions that "at twenty (she) tried to die/ To get back, back, back to (him)". This shows that although her father was an overbearing, dominant, almost stifling presence in her life, he was also a very important one. Even in death he retains his power over her life and the only way in which she can escape him is to die and join him. The poem ends with threats of another suicide attempt. She cuts herself off so she can be left alone to die. The last line of the poem; "Daddy, daddy, you bastard, I'm through", is a kind of severance from a turbulent love affair. Such reference to her father appears in Plath's other work, such as "Little Fugue". ...read more.