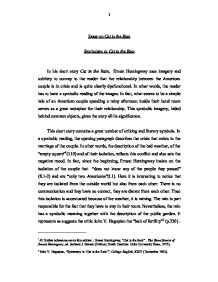 Symbolism in Cat in the Rain

Essay on Cat in the Rain Symbolism in Cat in the Rain In his short story Cat in the Rain, Ernest Hemingway uses imagery and subtlety to convey to the reader that the relationship between the American couple is in crisis and is quite clearly dysfunctional. In other words, the reader has to have a symbolic reading of the images. In fact, what seems to be a simple tale of an American couple spending a rainy afternoon inside their hotel room serves as a great metaphor for their relationship. This symbolic imagery, hided behind common objects, gives the story all its significance. This short story contains a great number of striking and literary symbols. In a symbolic reading, the opening paragraph describes the crisis that exists in the marriage of the couple. In other words, the description of the bad weather, of the "empty square"1(l.10) and of their isolation, reflects this conflict and also sets the negative mood. In fact, since the beginning, Ernest Hemingway insists on the isolation of the couple that "does not know any of the people they passed" (ll.1-2) and are "only two Americans"(l.1). ...read more.

It is the cat. This symbolic animal is so essential to the tale that it is described right in the title. The cat symbolically reveals the psychological state and emotional desires of the American wife. On other words it is a metaphor for the woman. She identifies herself to it. This connection between the wife and the animal is made to the reader when she described the cat as "she". In fact, although the wife is not physically close enough , she determines its gender. In addition, the American woman's empathy for the cat is shown through her persistence to rescue it from the rain despite the fact that she has to go out and get wet herself. She knows "it isn't any fun to be a poor kitty out in the rain"(l.58). This demonstrates that she feels herself like a cat drowning in the rain. All this implies that her husband is the source of her emotional despair. He does not really give her the attention she deserves. He is indifferent to her needs. Consequently, the cat symbolises what she wants physically that is to say to be held, stroked, touched, and emotionally to be loved and cared for. ...read more.

She admires " the way he wanted to serve her" (l.27). This great attraction to him is underlined by the repetitions of the verb "she liked". It demonstrates the great contrast between the husband and the hotel-keeper. This rift is more obvious at the end of the story when the hotel owner send the maid to bring a cat to the American wife. He has provided her with the attention that she is not receiving from her husband. The hotel-keeper also procures her the feeling of comfort and protection that her husband denies her. In brief, the lack of attention is filled at least emotionally by the owner of the hotel but it is also suggested that she will be satisfied s******y . And this fullness is here symbolised by the intermediary of the cat. In conclusion, Hemingway's use of symbolism is a great contribution to the richness of his characters. It allows the reader to better understand the psychological experiences of the characters with their entourage. Without this symbolic images, for instance in this text the cat, the story would lose much of both their colour and clarity. Moreover, Ernest Hemingway has succeeded very well in this story in showing that individualism of the people living with their own problem is in many case the cause of split and despair. ...read more.