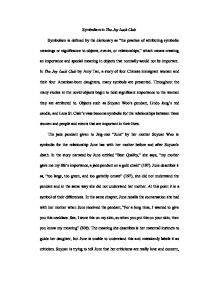 Symbolism in The Joy Luck Club

Symbolism in The Joy Luck Club Symbolism is defined by the dictionary as "the practice of attributing symbolic meanings or significance to objects, events, or relationships," which means creating an importance and special meaning in objects that normally would not be important. In The Joy Luck Club by Amy Tan, a story of four Chinese immigrant women and their four American-born daughters, many symbols are presented. Throughout the many stories in the novel objects begin to hold significant importance to the women they are attributed to. Objects such as Suyuan Woo's pendant, Lindo Jong's red candle, and Lena St. Clair's vase become symbolic for the relationships between these women and people and events that are important in their lives. The jade pendant given to Jing-mei "June" by her mother Suyuan Woo is symbolic for the relationship June has with her mother before and after Suyuan's death. In the story narrated by June entitled "Best Quality," she says, "my mother gave me my life's importance, a jade pendant on a gold chain" (197). ...read more.

When Lindo was first married a special candle was lit. This candle had two ends to light, one end had the name of the bride and the other end had the name of the groom. If neither end of the candle were to extinguish before the next day Chinese customs say that the wedding would be successful. The candle already has a symbolic meaning within the Chinese culture, the success of the marriage. Within the story it also represents the beliefs, customs, and superstitions behind the marriage. That night after the servant designated to watch the candle had run away, out of fear of the Japanese, Lindo ran into the room and "[her] throat filled with so much hope that it finally burst and blew out [her] husband's end of the candle" (60). Blowing the candle out symbolizes Lindo taking control of her life. Her newly acquired independence is her way of escaping her marriage without dishonoring her family. ...read more.

Lena is to blame for the insecurity her marriage and the vase are in, but even with this knowledge she does not take action against the situation. Her mother realizes this and shatters the vase to teach Lena that she cannot just sit idly and watch, but that she should prevent an oncoming disaster if she can. The shattered vase then represents an action taken to change Lena's submissiveness and grow into a stronger more self-aware person. Each woman's object is an intricate symbol of the lives surrounding its owner. Suyuan's pendant changes its meaning from its first introduction to its closing. It was a symbol of difference and became a symbol of concerned and love, and in this change also signifies learning and understanding. Lindo's red candle ultimately represents freedom through the understanding of tradition and culture. Lena's vase when intact represents a shaking marriage while when broken describes the discovery of her own personal worth. The symbolism used in the novel weaves each object with the event and relationship it is associated with perfectly to create a complex, expressive story. ?? ?? ?? ?? ...read more.