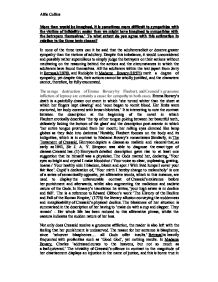 Sympathy for the betrayers and the betrayed. Cresseid and Madame Bovary are dissimilar to Emma in so far as they experience a development as a result of their infidelity, the former explicitly and the latter implicitly.

More than would be imagined, it is sometimes more difficult to sympathise with the victims of infidelity; easier than we might have imagined to sympathise with the betrayers themselves.' To what extent do you agree with this estimation in relation to the three texts chosen? In none of the three texts can it be said that the adulterers elicit or deserve greater sympathy than the victims of adultery. Despite this imbalance, it would unconsidered and possibly rather supercilious to simply judge the betrayers on their actions without meditating on the reasoning behind the actions and the circumstances in which the adulterers have found themselves. All the adulterers within the text (apart from Jerry in Betrayal (1978), and Rodolphe in Madame Bovary (1857)) merit a degree of sympathy, yet despite this, their actions cannot be wholly justified, and the characters cannot, therefore, be fully exonerated. The savage destruction of Emma Bovary by Flaubert, and Cresseid's gruesome infliction of leprosy are certainly a cause for sympathy in both cases. Emma Bovary's death is a painfully drawn out event in which 'she turned whiter than the sheet at which her fingers kept clawing' and 'soon began to vomit blood. Her limbs were contorted, her body covered with brown blotches.' It is interesting to note the contrast between the description at the beginning of the novel in which Flaubert erotically describes 'the tip of her tongue poking between her beautiful teeth, delicately licking the bottom of the glass' and the description post-arsenic in which 'her entire tongue protruded from her mouth; her rolling eyes dimmed like lamp globes as they fade into darkness.' Notably, Flaubert focuses on the body and its indignities, which is in contrast to Madame Bovary's romanticism Similarly, in The Testament of Cresseid, Henryson depicts a disease so realistic and visceral that, as early as 1841, Sir J. A. Y. Simpson was able to diagnose the exact type of disease Cresseid has. ...read more.

Jerry also fails to recall with accuracy certain events relating to their relationship. For example when Jerry recalls throwing Emma's daughter in the air he believed it to be in Emma's kitchen, to which she replied, 'it was your kitchen'. When Jerry calls her 'darling' she responds, 'don't say that,' because she knows that this term of endearment is not meant by Jerry. Emma puts in a lot of effort into the affair, as indicated by her yearning for a continuation of their romantic escapades: 'you see, in the past, we were inventive, we were determined,' Jerry's disinterested response is, 'It would not matter how much we wanted it if you're not free in the afternoons and I'm in America.' This is extremely similar to Rodolphe's remark 'You're mad, you really are! ... How could we do that?,' when Emma puts forward the idea of a sojourn in Paris, and is indicative of the contrasting levels of commitment between the adulterer and the adulteress. When they finally decide on their trip to Paris, Madame Bovary asks, 'I am counting the days. Aren't you?' There is also a link between that and Emma's question 'will we ever go to Venice?' She answers her own question in Betrayal - in Madame Bovary, nothing is said at all. Emma's desire for something more in their relationship is indicated in her wish for a shared home with Jerry. She is saddened by the fact that 'the crockery and the curtains and the bedspread' have been left for so long. She later says to Jerry 'you didn't ever see it as a home in any sense did you?,' to which Jerry replied, 'no, I saw it as a flat... you know.' Emma correctly acknowledges Jerry's desires when she finishes off his sentence with the words 'for f*****g,' despite Jerry's protestation of 'for loving'. Emma's inability to let go of the relationship is indicated in the scene where she struggles to take her ring from her keyring and ends up throwing it to Jerry to take it off - Jerry would be happy to end the relationship. ...read more.

It is a particularly significant line, since Rodolphe wields a knife at one point, and this fails to elicit the same response from Emma. One strikingly poignant scene is when Charles finally sees all the letters from Emma's lovers: 'his deep despondency caused general amazement. He no longer went out, he saw no one, he even refused to visit his patients. People began saying that he 'shut himself off to drink.'' The final description of him is as a 'long-bearded, wild-looking man in filthy clothes who paced up and down noisily.' For all Charles' faults, it seems unthinkable to sympathise more with Emma than Charles. In all three cases, the victims garner more sympathy than the betrayers. One should not nonchalantly accept the three primary adulterers' actions as morally reprehensible; but we should acknowledge that their actions are borne out of something more complex than it would at first appear. The greatest sympathy should be given to Cresseid because her life was subject to fate; she lacked all volition owing to Henryson's depiction of the all-encompassing control of the Gods. I say 'Henryson's depiction' because Chaucer's original has been manipulated by Henryson such that it rapidly avoids the issue of her affair whilst also removing all her volition. Madame Bovary represents the repressed sensuality within us, and the reader can certainly feel for her more than the prudish and monotonous environment she inhabits (ironically, it was a puritanical society that condemned Flaubert's novel for being too sympathetic to an adulteress). It is difficult to sympathise with Betrayal's Emma. It is true that she longed for a more meaningful relationship with Jerry, but her dedication to Jerry is severely questioned given the initiation of her additional affair with Casey. One would have to question the disposition of any individual who sympathises with the adulterers more than the victims of adultery, as any reader of Madame Bovary would attest to. 1. http://www.lib.rochester.edu/camelot/teams/testaint.htm 2. 'The Perpetual Orgy' (Vargas Llosa) 3. 'Madame Bovary' (Stephen Heath) 4. Letter from the Times Literary Supplement Word count with quotes: 3720 Word Count without quotes: 2895 Alfie Collins ...read more.