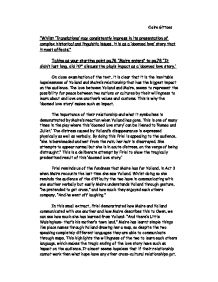 Claire Gittoes "Whilst 'Translations' may consistently impress in its presentation of complex historical and linguistic issues, it is as a 'doomed love' story that it most affects." Taking as your starting point pg.76 "Maire enters" to pg.78 "It didn't last long, did it?" discuss the play's impact as a 'doomed love story.' On close examination of the text, it is clear that it is the inevitable hopelessness of Yolland and Maire's relationship that has the biggest impact on the audience. The love between Yolland and Maire, seems to represent the possibility for peace between two nations or cultures by their willingness to learn about and love one another's values and customs. This is why the 'doomed love story' makes such an impact. The importance of their relationship and what it symbolises is demonstrated by Maire's reaction when Yolland has gone. This is one of many times in the play where this 'doomed love story' can be likened to 'Romeo and Juliet.' The distress caused by Yolland's disappearance is expressed physically as well as verbally. By doing this Friel is appealing to the audience, "she is bareheaded and wet from the rain; her hair is disarrayed. ...read more.

They both come from "wee villages," whose nearest neighbours are other tiny rural villages, they both find it equally hard to pronounce their names "aren't they odd names? Sure they make no sense to me at all." So the two characters are not that different at all despite having different backgrounds and living in different countries, they do have similarities. It is Maire and Yolland's ability and willingness to find these similarities which heightens the impact of the 'doomed love story.' On the other hand, it could be argued that the reason this 'doomed love story' has such an affect on us as an audience is because Maire and Yolland's relationship resembled the possibility for peace and by this being destroyed the thought of a peaceful cooperation between the two nations is also crushed. So on a simple level we are affected by the sadness of these two peoples relationship being 'doomed' beyond their power and eventually destroyed, but also on a wider scale we are affected by the meaning behind their relationship. The inevitabilities of the love story are what makes it have such a lasting impression on the audience. ...read more.

live in humble crofts and this is a far cry from the waiter service and regular fine meals we feel Yolland must receive daily without thought or reflection. If Yolland was to isolate himself away from the safety of his soldiers we know he would be at great risk from the darker elements of the community. This apparent naivety makes the audience fear for him, he seems to romanticise the whole situation turning Baile Beag into a Utopia, yet we know of the Donnelly Twins existence and we feel we know their intentions. It is hard not to feel sympathy for Yolland when we know that the Donnelly Twins are 'out and about.' Although we are never told in any detail we are drawn to the conclusion that the Donnelly Twins have brought an end to Yolland's young life. Jimmy encapsulates this "doomed love story" in his final lines, "Do you know the Greek word endogamein? It means to marry within the tribe. And the word exogamein means to marry outside the tribe. And you don't cross those borders casually- both sides get very angry. It is Maire and Yolland's willingness to attempt to cross these borders and to learn from one another, which has the deepest impact on the audience. ...read more.