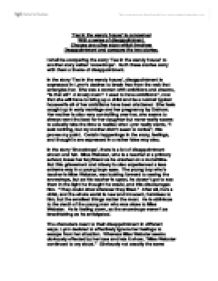 The young boy who's teacher is Miss Webster, was looking forward to seeing the snowdrops, but as his teacher is upset, he doesn't get to see them in the light he thought he would, and this discourages him. "They could draw whatever they liked." After all, he's a child, and the whole world is new and innocent, harmless to him, but the smallest things matter the most. He is oblivious to the death of the young man who was close to Miss Webster. He is feeling down, as the snowdrops weren't as breathtaking as he anticipated. The characters react to their disappointment in different ways; Lynn decided to effectively ignore her feelings to escape from her situation. ...read more.

"She was dressed in a black frock." In 'Tea in the wendy house', Lynn's feelings are expressed through sarcasm, "Perhaps I could wear a mantilla to hang nappies on the line?" this expresses her disapprovement at her life in the future. The writer, Adele Geras, gets the feelings across to the reader with sarcasm, strong feelings through the characters. Aldo the part of using parallels to the present and the past. She does this by referring to the Lynn and Grahams childhood when they spent time in the wendy house together. The writer cleverly associates what is happening now with what was happening to them as children. The two stories are fairly alike in some respects in the sense of disappointment, although they are at completely different levels, but feelings are felt strongly either way. Jason Warner ...read more.