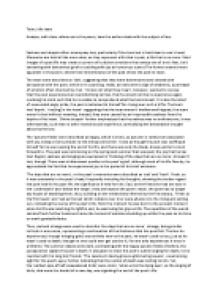 Tear, idle tears. analyse, with close reference to the poem, how the author deals with the subject of loss

﻿Tears, idle tears Analyze, with close reference to the poem, how the author deals with the subject of loss. Sadness and despair often accompany loss, particularly if the item lost is held dear to one?s heart. Memories are held all the more dear, as they represent a life that is past, a life that is no more. Vivid images of a past life may create a current of turbulent emotions that sweep one of one?s feet, be it lamenting with bottomless grief or cackling with joy at humorous scenes The former seemed more apparent in the poem, where fond remembrance of the past drives the poet to tears. The tears were described as ?idle?, suggesting that they were bothersome and viewed with annoyance with the poet, which isn?t surprising, really, as tears were a sign of weakness, a portrayal of emotion often shunned by men. ?I know not what they mean?, however, seemed to convey that the poet experienced an overwhelming sorrow, that he would not like to experience again, numbing his mind such that he is unable to comprehend what the ...read more.

Sad, as the friends he had are now in the ?underworld? and ?below the verge?, they are beyond the poet?s reach, the poet has no longer any hopes of attaining them, thus, building on the melancholy inferred by the first stanza,. ?Fresh as the first beam? and ?sad as the last which reddens over one? were allusions to the rising and setting sun, indicating the course of the poet?s life, from the moment he was born to the present moment when his life was reaching its rightful end, he was losing his grip on life. The repetition of the words sad and fresh further hammers home the turmoil of emotions building up within the poet as his time on earth gradually fades. Then, sad and strange were used to describe ?the days that are no more?, strange, being similar to fresh in one sense, representing a continuation of the freshness that the poet felt. The loss he experienced, though bringing grief, was entirely new to the poet, he wasn?t used to loss, just as he wasn?t used to death, though no one could ever get used to it, for one only experiences it once in a lifetime. ...read more.

Meanwhile, wild with regret shows the regret he felt in letting time slip past his fingers, that the ?loss? wasn?t accidental, it was due in part to his idleness, which explains his grief. O death in life is a culmination of the poet?s feelings towards the loss. Although the poet was alive, the memories caused him tormenting pain, such that he wished himself dead, that the death depicted in the previous stanza wasn?t true, being merely a fragment of the imagination brought about by the mind-numbing remorse. The lack of rhyme scheme in the poem also suggests that the poet lost control of his emotions and thoughts, reinforcing his feelings towards his loss. The poet attributed loss to his carelessness; it was not accidental, it was all his fault that the days are no more. He emphasized the regret he felt by repeating diction that expressed his feelings on the loss. He face it by shedding tears and wishing himself dead, a rather pessimistic view on life. Thus, this summarizes the ways the poet dealt with the subject of loss. ...read more.

This is a well written and detailed essay which makes some perceptive comments and clearly understands the poet's intentions when crafting the poem. Good use of appropriate quotes throughout. Topic sentences are needed and also more literary and linguistic terminology in order to improve the grade.