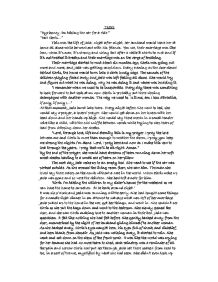 Tears. Their marriage started to rust about six months ago, Chris was going out more and more, and Jada was getting suspicious.

Tears ''Bye honey I'm taking the car for a ride.'' ''But Chris...'' This was the life of Jada; night after night, her husband would leave her at home all alone while he went out with his friends. You see, their marriage was like iron; when it's new, it's strong and shiny but after a while it starts to rust and if it's not treated it breaks and their marriage was on the verge of breaking. Their marriage started to rust about six months ago, Chris was going out more and more, and Jada was getting suspicious. Every evening as the door closed behind Chris, the house would turn into a dark lonely cage. The sounds of the children playing faded away and Jada was left feeling all alone. She would try and figure out what he was doing, why he was doing it and where was he doing it. "I remember when we used to be inseparable. Every day there was something to look forward to but look at us now. ...read more.

I'll be back around eight.' It was six o'clock and Jada was running a little early. She had bought some things for a candle light dinner in an attempt to salvage what was left of her marriage. Jada pulled up to the house in the car, got her things, and went in. She couldn't see Chris so she put the bags down and went to the bedroom. She slowly opened the door, and she saw Chris making love to another woman in their bed. Jada was speechless. It felt like nothing she had felt before. She gently backed away from the door, mesmerized by the sight of her husband giving himself to another woman. As she backed away, Chris's eyes caught hers, his eyes full of shock and disbelief, and hers blank from despair. As Jada was walking away, it started to rain. She went and sat down on the steps of the front porch. It was like the world was crying for her because she had no more tears to shed; each raindrop was a reminder of all the pain and sorrow Chris had put her through. ...read more.

Lying to me, sleeping around where's the love in that?" Chris answered with the uttermost sincerity. "Love is gentle and kind, its unconditional, love is what I feel for you and I know that right know you probably hate me but ask yourself can you ever stop loving me. "You're right I can't stop loving you but what's love got to do with it...?" "Everything, loves got everything to do with it. Love is the only thing that can keep us together." "What...what if I don't want us to stay together, did you think about that- oh yeah that's right you don't think you just do?" Sadness, anger, hate, these were just a few of the emotions Jada was felling right now but there was one emotion that had always been there love, but could she do it could she brings her self to forgive Chris. Then Jada looked at Chris and for the first time in her life she saw him cry, right there he broke down in the fear of loosing her. She forgot about the years that she'd wasted, the tears that she'd tasted, and she done it- she forgave him. ...read more.