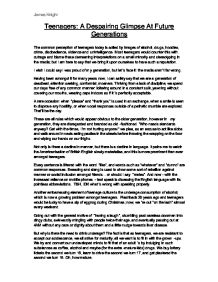 Teenagers - A Despairing Glimpse At Future Generations. I wish I could say I was proud of my generation, but lets face it: the media arent far wrong.

Teenagers: A Despairing Glimpse At Future Generations The common perception of teenagers today is soiled by images of alcohol, drugs, hoodies, crime, disobedience, violence and unintelligence. Most teenagers would counter this with outrage and blame these demeaning interpretations on a small minority and stereotyping in the media; but I am here to say that we bring it upon ourselves to have such a reputation. I wish I could say I was proud of my generation, but let's face it: the media aren't far wrong. Having been amongst it for many years now, I can safely say that we are a generation of deadbeat, attention seeking, conformist, moaners. Thriving from a lack of discipline, we spend our days free of any common manner: loitering around in a constant sulk, yawning without covering our mouths, wearing caps indoors as if it's perfectly acceptable. A rare occasion: when "please" and "thank you" is used in an exchange, when a smile is seen to disprove any hostility, or when vocal responses outside of a pathetic mumble are explored. ...read more.

Flashback 20 years ago and teenagers would be lucky to have a sip of eggnog during Christmas; now, we're out "on the lash" almost every weekend. Going out with the general motive of "having a laugh", stumbling past careless doormen into dingy clubs, awkwardly mingling with people twice their age, and eventually passing out at 4AM without any care or dignity about them and a little nudge towards liver disease. But why is there the need to drink underage? The fact is that as teenagers, we are resistant to accept our adolescence, we all strive for maturity, all we want is to fit in with the grown-ups. We try and convert our undeveloped minds to fit that of an adult's by indulging in such substances as coffee, alcohol and maybe (for the extra-mature kids) drugs. We buy lottery tickets the second we turn 16, learn to drive the second we turn 17, and get plastered the second we turn 18. Oh, how mature. While the teenagers race towards maturity, the parents try their hands at being young and hip just once, and are slated beyond belief. ...read more.

Something that is corresponding amidst most teenagers is the constant need to complain, it's almost as if we enjoy it. Even if we were living the perfect life, we'd probably whine about how it's "too perfect". Facebook is used as a platform for voicing such dire grievances as "EASTENDERS CANSELLD 4 THA FOOTIE! OMG!" or "ME MAM BURNT ME CHIKEN NUGETS!" - freedom of speech at its best. Money is an aspect which often spurs complaints: we complain about our lack of money, so we get a job and complain about how bad that is, then we earn money and spend it on trivial things. Then the cycle repeats, over and over and over. Maybe there's nothing wrong with us complaining, I mean, it's not like there are people worse off or anything. It's not easy wielding such a pretentious outlook at my age, it's a constant struggle, withstanding the strain of influence inflicted by fellow teenagers. Alas, few are those who choose a country walk over a pub crawl, Tchaikovsky over Tupac, broadsheets over booze. "Stuff the rules, we just wanna have fun!" Will a game of chess and some homemade shortbread entice you? Thought not. Word count - 954 James Knight ...read more.