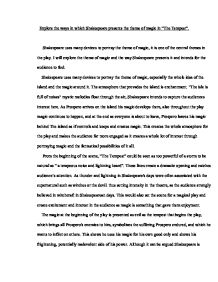 Explore the ways in which Shakespeare presents the theme of magic in "The Tempest". Shakespeare uses many devices to portray the theme of magic, it is one of the central themes in the play. I will explore the theme of magic and the way Shakespeare presents it and intends for the audience to feel. Shakespeare uses many devices to portray the theme of magic, especially the whole idea of the island and the magic around it. The atmosphere that prevades the island is enchantment. "The isle is full of noises" mystic melodies float through the air, Shakespeare intends to capture the audiences interest here. As Prospero arrives on the island his magic develops there, also throughout the play magic continues to happen, and at the end as everyone is about to leave, Prospero leaves his magic behind The island as if controls and keeps and creates magic. This creates the whole atmosphere for the play and makes the audience far more engaged as it creates a whole lot of interest through portraying magic and the fantastical possibilities of it all. ...read more.

and Prospero insisting on unquestionable service from Ariel, which is cruel as Ariel is very obedient and performs all his tasks very accurately but just wants to be free, makes the audience change their mind. Throughout this play Shakespeare presentation of Prospero questions the audience a lot, whether they "like" the character or not. "The Tempest" deals with four distinct but mutually interactive worlds of existence- The heaven, the world of supernatural, the human world and the sub-human world. All these worlds are touched by magic in some way as are all inhabitants either for good but mainly to inflict suffering on others. Prospero's magic helps to create power and control for himself. Shakespeare uses this idea in the beginning of the scene where Ariel performs the storm rather than Prospero because Prospero is in control of Ariel and makes him do his dirty jobs for him. "performed to point the tempest that i bade thee?". ...read more.

The clever use of portraying Prosepro as an alchemist or God or even as a representation of Shakespeare himself kept the audience guessing throughout the play keeping them on the edge, expecting something new and exciting and magical to happen. This play also questions the audience about the ups and downs of magic, as at one point the audience can be sure that Prospero's evil, as shown by cruelness to Caliban for example, making him obey even when Prospero himself is not about, manipulates him, "I must obey, his art is of such power" (Caliban), but then he does good by bringing a loved couple together and forgiving his brother of his sins, "I do forgive, thy rankest fault", makes audience wonder if he is good or cruel. "The Tempest" cannot be just pinpointed and said magic is most important theme in the whole play, as there are other important themes used such as love which may be just as important. Shakespeare just portrays the theme of magic as one of the most important elements in the play. [2098] ...read more.