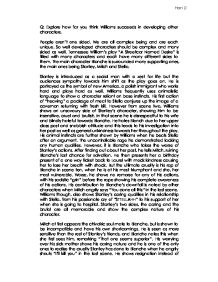 Tennessee Williams play A Streetcar Named Desire is filled with many characters and each have many different sides to them. The main character Blanche is surrounded many supporting ones, the main ones being Stanley, Mitch and Stella.

Q: Explore how far you think Williams succeeds in developing other characters. People aren't one sided. We are all complex being and are each unique. So well developed characters should be complex and many sided as well. Tennessee William's play "A Streetcar Named Desire" is filled with many characters and each have many different sides to them. The main character Blanche is surrounded many supporting ones, the main ones being Stanley, Mitch and Stella. Stanley is introduced as a social man with a zest for life but the audiences sympathy towards him shift as the play goes on. He is portrayed as the symbol of new America, a polish immigrant who works hard and plays hard as well. Williams frequently uses animalistic language to show a character reliant on base instincts. His first action of "heaving" a package of meat to Stella conjures up the image of a caveman returning with fresh kill. However from scene two, Williams shows an unsavoury side of Stanley's character, showing him to be insensitive, cruel and brutish. ...read more.

Williams though, also shows Stanley's caring qualities in his relationship with Stella, from his passionate cry of "STTELLAHH" to his support of her when she is going to hospital. Stanley's two sides, the caring and the brutal are all memorable and show the complex nature of his character. Mitch at first appears the chivalric soul mate to Blanche, but is shown to be incompatible and have his own shortcomings. He is seen as more sensitive than the rest of Stanley's friends, and Blanche notes this when she first sees him, remarking "That one seems superior". His worrying over his sick mother shows his caring nature and he is one of the only ones to realise the cruelty Stanley has done to Blanche when he angrily shouts "I'll kill you" in the last scene. He shows resignation instead of anger when Blanche's lies are uncovered, telling us that he genuinely liked and cared for Blanche. But Mitch and Blanche are not completely compatible, evident when Blanche elegantly dances in scene two while Mitch can only clumsily copy her. ...read more.

She is calm and collected, and able to control herself which is remarked on by Blanche, saying "I never had your beautiful self control". She is also adaptable to new situations, leaving "old" America and Belle Reeve behind and comfortably able to live in "new" America with Stanley; something Blanche found impossible. She does choose to not believe Blanche's story of Stanley's r**e, despite not being able to deny it having suffered Stanley's brutality first hand. However all of the new American woman would have done the same as marriage is essential to survival. This is reiterated to her when Eunice says "You done the only thing you could do" Stella is more than just a simple good person character, her actions being significant to the play. Tennessee Williams does a good job of developing other characters in "Streetcar". None of the supporting cast are one dimensional and all play significant roles in the play. Stanley and Mitch both show their good and bad sides, while Stella is important in showing us societies reaction to what is going on. 930 Words ...read more.