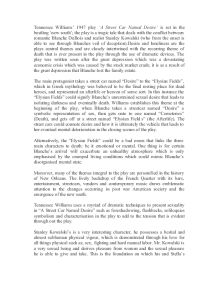 Tennessee Williams 1947 play A Street Car Named Desire is set in the bustling new south; the play is a tragic tale that deals with the conflict between romantic Blanche DuBois and realist Stanley Kowalski

Tennessee Williams' 1947 play 'A Street Car Named Desire' is set in the bustling 'new south'; the play is a tragic tale that deals with the conflict between romantic Blanche DuBois and realist Stanley Kowalski (who from the onset is able to see through Blanches veil of deception).Desire and loneliness are the plays central themes and are closely intertwined with the recurring theme of death that is ever present in the play through the use of dramatic devices. The play was written soon after the great depression which was a devastating economic crisis which was caused by the stock market crash; it is as a result of the great depression that Blanche lost the family estate. The main protagonist takes a street car named "Desire" to the "Elysian Fields", which in Greek mythology was believed to be the final resting place for dead heroes, and represented an afterlife or heaven of some sort. In this instance the "Elysian Fields" could signify Blanche's unrestrained s****l desire that leads to isolating darkness and eventually death. Williams establishes this theme at the beginning of the play, when Blanche takes a streetcar named "Desire" a symbolic representation of s*x, then gets onto to one named "Cemeteries" (Death), and gets off at a street named "Elysian Fields" (the Afterlife). ...read more.

Blanche is very fake much like the contents of her trunk such as: the fake fur, the costume jewelry and the "rhinestones next door to glass" not only show how she uses fantasy to make life more bearable but also highlights how she is desperately trying to cling on to her aristocratic roots. In addition, the props used through out the play have great significance as they give the audience real insight into Blanches "real" character. Illusion have held Blanche salvage her sanity. She insists that Mitch cover up the naked light bulb with brightly coloured lantern. Her dressing up the light bulb helps the audience envision how Blanche elaborately decorates the truth to try and make it seem better than it is and how she deals with her problems by making belief. "I don't want realism. I want magic" she states, Blanche dismisses anything that could bring her back to reality and instead live shadows were she is shielded from reality. In my opinion lighting is the most important device used in the play as it is through the use of lighting that the audience become aware of Blanche's deteriorating sanity and just how fragile she is inspite of the fa�ade she puts on. ...read more.

His asking is a mere practicality, he does not even wait for a reply and "he starts to remove his shirt". This shows that he is very confident even with people who he doesn't know too well. Stanley is secure with his sexuality and removes his shirt even though he is sweaty. When compare to his friend Mitch we see that there are major differences. Mitch is uncomfortable when removing his jacket and does not bestow the level of confidence that Stanley has. Tennessee Williams shows how sexuality can cause the demise of a person's mental capacity if it is not controlled. The story has a tragic ending as Blanche is carried away to the lunatic asylum and Stanley and Stella are left to salvage the remnants of their relationship, ironically their relationship will now be founded on the same principles that lead to Blanche's mental deterioration- Illusions. I believe that a Street Car Named Desire is still relevant today especially with regards to relationships as some people still struggle to accept when they their partner leaves them for someone of the same s*x .it also deal with a controlling figure in relationships which is still as present now as it was when the play was written, in many relationships people find themselves submitting to the more dominant character (like Stella and Stanley).However, attitudes towards divorce have softened and relationships such as these tend to end in divorces. ...read more.