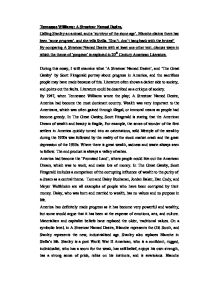 Tennessee Williams: A Streetcar Named Desire. Calling Stanley an animal, and a 'survivor of the stone age', Blanche claims there has been 'some progress', and she tells Stella, 'Don't- don't hang back with the brutes!' By comparing A Streetcar Named Desire with at least one other text, discuss ways in which the theme of 'progress' is explored in 20th Century American Literature. During this essay, I will examine what 'A Streetcar Named Desire', and 'The Great Gatsby' by Scott Fitzgerald portray about progress in America, and the sacrifices people may have made because of this. Literature often shows a darker side to society, and points out the faults. Literature could be described as a critique of society. By 1947, when Tennessee Williams wrote the play; A Streetcar Named Desire, America had become the most dominant country. Wealth was very important to the Americans, which was often gained through illegal, or immoral means as people had become greedy. In The Great Gatsby, Scott Fitzgerald is stating that the American Dream of wealth and beauty is fragile, For example, the sense of wonder of the first settlers in America quickly turned into an ostentatious, ...read more.

She is also in touch with her emotions. Tennessee Williams states, through this symbolic use of characters, that the genteel ways of the Old South have been forever destroyed by the coarseness and brutality of the modern age. Blanche fights to save her Old Southern roots and the family mansion, but looses them both, but then also, is unable to adapt to Stanley and Stella's way of life at Elysian Fields. This shows that people are products of their past as shown by Blanche being destroyed by events in her life. Because of this, the mood of the entire play is dark and sombre, a reflection of the decadence and loss described in the play. Blanche represents the fallen aristocracy of the South, is a misfit who is trying to straighten out her life while taking refuge in New Orleans with her relatives, Stanley and Stella Kowalski. Stanley is a domineering man with common ways, is set against Blanche, and is ultimately responsible for her descent into insanity and placement in the state institution. ...read more.

This detail suggests almost that he has been hunting. There are also stereotypical gender roles, as he throws the meat to Stella through the window as she is indoors, which suggests that it is her responsibility to prepare it, and his to provide it. Stanley is a man who hasn't really progressed very much from early man, and sometimes is described in terms of an animal. Stella describes him as "a different species." She is aware that Stanley is from a different culture to the two sisters, but Blanche is shocked that Stella is proud of Stanley. In A Streetcar Named Desire, Tennessee Williams paints a picture of a society in a state of transition and uncertainty. Blanche is trying to live in an idealised past, but her harsh present reality destroys her. The graceful world of the Southern plantation has gone. The reality of post-war America is the brutish and graceless nature of Stanley and his poker playing friends who, most of them lack caring qualities, especially in the ways that society deals with it's more vulnerable members. Economically and materialistically, America has made progress, but many, such as Fitzgerald and Williams, would argue that it is at the expense of culture and emotion. ...read more.