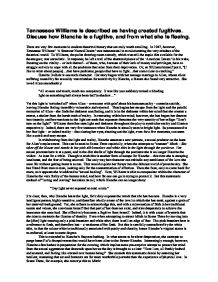 Tennessee Williams is described as having created fugitives. Discuss how Blanche is a fugitive, and from what she is fleeing.

Tennessee Williams is described as having created fugitives. Discuss how Blanche is a fugitive, and from what she is fleeing. There are very few moments in modern theatrical history that are truly worth recalling. In 1947, however, Tennessee Williams' 'A Streetcar Named Desire' was instrumental in revolutionising the very mindset of the theatrical world. To Williams, the polite drawing room comedy, which was still the staple diet available for the theatregoer, was unrealistic. In response, he left a trail of the shattered pieces of the 'American Dream' in his wake, focusing on the vitality - or lack thereof - of those, who, because of their lack of money and privileges, have to struggle actively to cope with all the problems that arise from their deprivation. Or, as Williams himself put it, "[I like to write about people]...that have problems, people that have to fight...that come close to cracking." Blanche DuBois is one such character. Her story began with her teenage marriage to Allan, whose silent suffering caused by his sexuality was mistaken for sensitivity by Blanche, a feature she found very attractive. She loved Allan unendurably: "All at once and much, much too completely. It was like you suddenly turned a blinding light on something had always been half in shadow..." Yet this light is 'switched off' when Allan - overcome with grief about his homosexuality - commits suicide, leaving Blanche feeling incredibly vulnerable and rejected. ...read more.

The pink brassiere here is a reference to flesh, and therefore l**t - a weakness of the flesh. But this is carefully contradicted by the white skirt, in that the colour white is traditionally associated with purity and chastity, hence Blanche's virginal status is re-enforced, at least to some degree. This is extended to Blanche's frequent bathing. In what seems to be sheer desperation, she attempts to purge herself of a deceptiveness that would have been alien to the former Blanche. Interestingly enough, however, Blanche often bathes in preparation for the evening, which implies some pre-emptive attempt to protect her mind from the s****l aggression that descends upon her as the day is brought to a close: "Here I am, all freshly bathed and scented, and feeling like a brand new human being!" She extends this systematic denial by asserting her intellect, reasoning that art and literature are far more worthwhile pursuits than the experience of physical love. In Scene Three, for example, she conveys this to Mitch: Blanche: Their literary heritage is not what most of them treasure, above all else!...And in the spring it's touching to notice them making their first discovery of love! As if nobody had known it before! Though, of course, Blanche only makes these assertions in the presence of Mitch, so this may be just flirting, as the slightly bitter references to youth and spring - symbolically the season for youth, vitality and fertility - suggest a more deceptive awareness of this particular line of conversation. ...read more.

But when Mitch arrives finally, she suddenly perks up, and the tune couldn't be further from her mind. But Mitch's attempt to r**e her is the final straw for Blanche, and this pushes her clear into insanity. All those years of searching for happiness have failed, and it is ironical that her final attempt - which laid faith in "mind over matter" in that personality rather than outward appearance became a selling point for Mitch - is the biggest failure. After this, there is no escape for Blanche - the painful reminder that is Stella's successful relationship with Stanley and the tune now haunt her incessantly. In the final scene, Stella is present with her baby - the product of her relationship - and the polka tune is immediately heard as Blanche enters, and it remains with her. The very fact that it now appears omnipresent is a clear indication that Blanche has finally submitted to insanity. Williams successfully used Blanche to point out the corruption and loneliness that reality had to offer; the same reality that Blanche tried so incessantly to escape. These attempts were useless, and this is precisely why Blanche is successful in reflecting the actualities of 1940s America. Not everyone is capable of surviving, and it would be very easy to conclude that Williams is effectively saying that it is easier to just give up. ...read more.