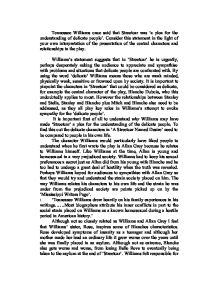 Tennessee Williams once said that Streetcar was &amp;#145;a plea for the understanding of delicate people&amp;#146;. Consider this statement in the light of your own interpretation of the presentation of the central characters and relationships in the play.

Tennessee Williams once said that Streetcar was 'a plea for the understanding of delicate people'. Consider this statement in the light of your own interpretation of the presentation of the central characters and relationships in the play. Williams's statement suggests that in 'Streetcar' he is urgently, perhaps desperately asking the audience to appreciate and sympathise with problems and situations that delicate people are confronted with. By using the word 'delicate' Williams means those who are weak minded, physically weak, sensitive or frowned upon by society. It is important to pinpoint the characters in 'Streetcar' that could be considered as delicate, for example the central character of the play, Blanche Dubois, who this undoubtedly applies to most. However the relationships between Stanley and Stella, Stanley and Blanche plus Mitch and Blanche also need to be addressed, as they all play key roles in Williams's attempt to evoke sympathy for the 'delicate people'. It is important first of all to understand why Williams may have made 'Streetcar' a plea for the understanding of the delicate people. To find this out the delicate characters in 'A Streetcar Named Desire' need to be compared to people in his own life. The character Williams would particularly have liked people to understand when he first wrote the play is Allan Grey because he relates to Williams himself. Like Williams at the time, Allan is young and h********l in a very prejudiced society. Williams had to keep his s****l preferences a secret just as Allan did from his young wife Blanche and he too had to undergo a great deal of hostility when the truth was revealed. Perhaps Williams hoped for audiences to sympathise with Allan Grey so that they would try and understand the strain society placed on him. The way Williams relates his characters to his own life and the strain he was under from the prejudiced society are points picked up on by the 'Mississippi Writers Page'. ...read more.

He still lives with his mother and is worries about leaving her alone at home. He makes the mistake of telling the other men about his anxiety as they make it clear they don't particularly care, therefore showing Mitch to be the weaker character amongst them. 'I gotta sick mother. She don't go to sleep until I come in at night.' 'Then why don't you stay home with her?' 'She says to go out, so I go out, but I don't enjoy it. All the while I keep wondering how she is.' 'Aw, for God's sake, go home then!' Later on in the same scene, we learn that Mitch is also an insecure character by the way he acts very shyly around Blanche, as they are introduced to each other for the first time. 'glancing back at Blanche and coughing shyly. He realizes he still has the towel in his hands and with an embarrassed laugh hands it to Stella.' Mitch's insecurities around Blanche and vulnerability to Stanley's criticisms show him to be weak minded and his anxieties about his mothers well being prove that he is very sensitive. It is for these reasons that Mitch could be considered as one of the delicate people. Diane Sauder also describes Mitch as a delicate character. 5 'His tragedy is that he is at once sensitive and mediocre. Hailing from the same poor working class as Stanley, he is not of the same coarseness and vulgarity. In fact, he is laughed at as being namby-pamby by his poker playing friends because he is very concerned about his ailing mother; they call him a 'mama's boy'.' The final character, whom I consider as delicate, is Allan Grey. Although he is not a central character in the play, he undeniably is a significant presence. We are told very little about Allan Grey during the coarse of the play, but what we do know is he killed himself as an act of regret for committing adultery. ...read more.

She finally tries to get Mitch to marry her but is very harshly turned down. 'Then marry me, Mitch!' 'I don't think I want to marry you any more.' 'No?' '(Dropping his hands from her waist) You're not clean enough to bring in the house with my Mother.' This cold, cutting, almost spiteful statement by Mitch ends his relationship with Blanche, who breaks into hysterics and following Mitch's departure, eventually collapses. As with Stanley and Blanche at the end of the play, the shocking end to this scene justifies the statement made by Williams. As the scene progresses the audience begins to understand that Blanche could not help sleeping with all those men and that she was merely seeking comfort and security. In this case it is Mitch who needs to understand the delicate people by appreciating Blanches situation. This is a point elaborated on by Diane Sauder. 5 'But Mitch is not educated or intellectual and cannot understand Blanches' behaviour, past or present. Since he sees things only as truth or lies, black or white, he deserts Blanche. Williams uses Mitch and Stanley in the latter two relationships as an example of how we should not treat the delicate people. His aim is for us to understand and sympathise with Blanche and for us to resent the cruel way in which Stanley treats her and Mitch rejects her. By referring back to the earlier passage quoted from 'Lament For The Moths' it is apparent that Stanley and Mitch can be seen as the 'Enemies of the delicate' Having analysed the way in which Williams has presented the central characters and relationships in 'A Streetcar Named Desire' and looking in particular at the way he has portrayed the delicate people, I believe his statement suggesting the play was 'a plea for the understanding of the delicate people' to be entirely accurate. Furthermore, I feel that through his use of characters inspired by those in his own life and a gripping story, he has succeeded in making people understand. ...read more.