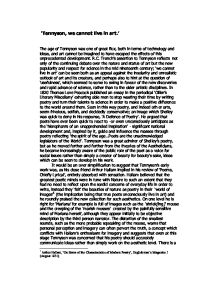 Tennyson, We can not live in art

'Tennyson, we cannot live in art.' The age of Tennyson was one of great flux, both in terms of technology and ideas, and art cannot be imagined to have escaped the effects of this unprecedented development. R.C. Trench's assertion to Tennyson reflects not only of the continuing debate over the nature and status of art but the new popularity and respect for science in the mid nineteenth century; 'we cannot live in art' can be seen both as an appeal against the insularity and unrealistic outlook of art and its creators, and perhaps also to hint at the question of 'usefulness', which seemed to some to swing in favour of the new discoveries and rapid advance of science, rather than to the older artistic disciplines. In 1820 Thomas Love Peacock published an essay in the periodical 'Ollier's Literary Miscellany' exhorting able men to stop wasting their time by writing poetry and turn their talents to science in order to make a positive difference to the world around them. Seen in this way poetry, and indeed other arts, seem frivolous, selfish, and decidedly conservative; an image which Shelley was quick to deny in his response, 'A Defence of Poetry'. He argued that poets have ever been quick to react to -or even unconsciously anticipate as the 'hierophants of an unapprehended inspiration' - significant national development and, inspired by it, guide and influence the masses through poetry reflecting 'the spirit of the age...Poets are the unacknowledged legislators of the World'. Tennyson was a great admirer of Shelley's poetry, but as he moved further and further from the theories of the Aestheticians, he became increasingly aware of the public ...read more.

They neither distract attention from nor undermine the seriousness of this, the brief stanzas effectively fragmenting the Palace into brief, passionless points representative of the meaningless artefacts within it, the monotonous rhythm and rhyme and the flat effect of the short fourth line intensifying this sterile, depressing effect. Although the message of the poem is clear cut the weakness inherent in the bathetic ending and the vacillating guilt of the soul, particularly in lines 229-232 which end with 'Laughter at her self-scorn.' seem to suggest that Tennyson himself was not convinced by it, or at least could think of no more adequate solution to the elitism of art in an age which was no longer prepared to see its creators as legislators or prophets. The firm resolution of the soul's rejection of the palace is rendered improbable by the stubbornly rising rhythm and unrepentant sentiment of the last two lines of the poem, and although she talks of returning there with others this is surely missing the point; the palace and the art within it must be opened and available to all if it is to survive, not just a privileged few. Tennyson's growing commitment to socially relevant poetry can also be seen in, amongst others, 'The Lady of Shalott', published in the same year and often seen as a companion poem, relating as it does the unfortunate fate of a solitary artist cut off from reality in a world entirely devoted to the mystical beauty of her weaving. However, unlike the soul of 'The Palace of Art' there is no pleasure in her involuntary isolation except in the glimpses of the outside world that come to her as she weaves 'But in her web she still delights To weave the mirror's magic sights...' ...read more.

far the poet most frequently quoted by scientists'5, proving that art and science could co-exist and even make use of one another in the less specialised and technically advanced science of the early Victorian period if only both were able to accept the value of the other. It is clear that, despite the sentiments expressed in 'The Poet's Mind', Tennyson was never an Aesthetician (the tension between the beauty of the imagery and the context are obvious even in early poetry such as Mariana) but he did move away from the so called Poems of Sensation, where the beauty of the words was accompanied by more oblique and less culturally relevant themes, to work obviously influenced by, and commenting on, contemporary issues. The unconvincing moral stance of 'The Palace of Art' and the gradual seeping of Tennysonian personality into the purportedly allegorical soul however reflects his own inability to resolve the problems in the relationship between life and art. He was committed to the idea of art remaining relevant to everyday life rather than being reduced to aesthetic objects to be admired by a privileged few yet, as he was well aware, his whole life was lived through art, he continuously sought solace from reality in his poetry, and his popular success was based on the loveliness of his poetry rather than on any deep meanings within it, explaining the evident ambivalence of the moral in 'The Palace of Art'. Tennyson agreed that we cannot live in art but he himself could not break free from the attraction of that exclusive inner world of imagery and beauty, and this is evident in the tensions in his work. ...read more.