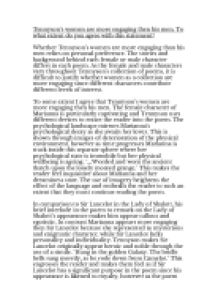 Tennysons women are more engaging then his men. To what extent do you agree with this statement?

?Hung in the golden Galaxy. The bridle bells rang merrily, as he rode down from Camelot.? This engrosses the reader and makes them feel as if Sir Lancelot has a significant purpose in the poem since his appearance is likened to royalty, however as the poem progresses his only role given by Tennyson is to remark on the look of the Lady Shalott?s corpse. Despite there being reason to suggest that Tennyson?s women are more engaging than his men, there is evidence to indicate that they are of equal standing. Tennyson uses elements of the solar system in Marianna and in the Lady of Shalott. In Marianna the image of the moon is used to demonstrate Marianna?s loss of power over life. It controls the direction of the shadows, which remind her of her lover, just like circumstances have prevented him from returning to her. ...read more.

Despite this, there is a point to which I do not agree that Tennyson?s women are more engaging than his men. In Morte D?Arthur Christian imagery is used to describe the impact Arthur had upon the land. The Round Table and the knights represent Christianity and its disciples. ?But now the whole round table is dissolved Which was an image of the mighty world?. This shows the reader just how important Arthur is and the significance of his death. The reader becomes heavily engaged because they become interested how his life resembles religion. In comparison the Lady of Shalott?s death is dramatic, as pathetic fallacy is used to demonstrate her retaliation against her life within the tower. ?In the stormy east-wind straining, the pale yellow woods were waning? this emphasises her daringness and engages the reader, as the whole world seems to be following her. But in contrast, the response to each death is different? ...read more.