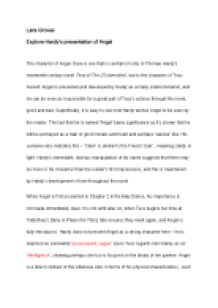 Tess of The DUrbervilles. Explore Hardy's presentation of Angel Clare

﻿Lara Groves Explore Hardy?s presentation of Angel The character of Angel Clare is one that is central not only to Thomas Hardy?s nineteenth century novel Tess of The D?Urbervilles1, but to the character of Tess herself. Angel is presented and developed by Hardy as a many sided character, and he can be seen as responsible for a great part of Tess?s actions through the novel, good and bad. Superficially, it is easy to see how Hardy wishes Angel to be seen by the reader. The fact that he is named ?Angel? bares significance as it?s shown that he will be portrayed as a man of good morals and heart and perhaps ?saviour? like. His surname also indicates this ? ?Clare? is similar to the French ?clair? , meaning clarity or light. Hardy?s immediate, obvious manipulation of his name suggests that there may be more to his character than the reader?s first impressions, and this is maintained by Hardy?s development of him throughout the novel. When Angel is first presented in Chapter 2 in the May Dance, his importance is not made immediately clear. It is not until later on, when Tess begins her time at Talbothay?s Dairy in Phase the Third, fate ensures they meet again, and Angel is fully introduced. Hardy does not present Angel as a strong character here ? he is depicted as somewhat ?preoccupied, vague?. ...read more.

Hardy makes the reader aware that Angel?s ideas on marriage are shown to have little flexibility, although this would not have been unusual in Victorian society, where matters of innocence and virginity held rigid rules. The quote ?Clare?s love was doubtless ethereal to a fault, imaginative to impractibility? in Chapter 36 shows that Angel?s love for Tess is far from practical and is idealistic. Angel believes Tess is the essence of purity and sees her as a perfect being, a ?visionary essence of a woman?. ?Visionary? here is important ? Angel has a certain vision of Tess which differs from whom she really is. It could be these flaws in character including stubbornness that prevent his forgiveness to Tess after her confession. He is also not shown to be a wholly religious man, unlike his parson father. Hardy says he preferred sermons in ?stones? to ?churches? ? similar to Hardy himself, as thought by scholar Pamela Dalziel who believes Hardy was ??more social that religious, and fundamentally different from the Evangelical?? 2. It is often thought that he weaves his own Agnostic ideas of religion into Angel, and that this is a main intentional fallacy for Angel. Hardy?s presentation of Angel is important as it helps to progress the story and show how his decisions have a direct effect on the eponymous Tess , and the worst of them show a different side to his character. ...read more.

faults that left a lasting mark on his wife, therefore it could be argued that in some ways Angel is the villain or the antagonist. His mistakes and wrongdoing throughout the novel help add depth to the story of Tess and help us form opinions of not only Angel but the other characters too, and make the reader consider Hardy?s motives behind depicting him like this, and why Tess?s misconceptions of Angel are not shown as much ? some critics argue that Hardy was actually in love with Tess, as he wrote in a letter ?"I have not been able to put on paper all that she is, or was, to me.? 4However, in spite of this Hardy seems eager to show the reader that Angel is a good and worthy man and often sides and finds refuge in Angel, for example sharing detest of organised Christianity. Overall, while Tess is somewhat idolised by Hardy, Angel is presented to show the good and bad humans always display; Angel in the end is not an ?Angel? and has his imperfections like all of us Word count not including quotes: 1159 Total word count: 1273 1. Hardy, Thomas. Tess of The D?Urbervilles , London: Penguin, 1994 2. Dalziel, Pamela. "Strange Sermon: The Gospel According to Thomas Hardy." Times Literary Supplement, 17 March 2006 3. Hardy, Thomas. The Ruined Maid, 1901 4. Woods, Rupert, Thomas Hardy, We Field-Woman Special Collections, University of Reading, May 2008 ...read more.