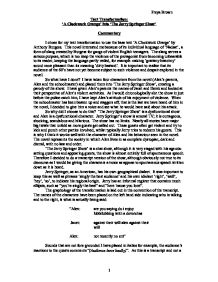 Text Transformation: 'A Clockwork Orange' into 'The Jerry Springer Show' Commentary I chose for my text transformation to use the base text 'A Clockwork Orange' by Anthony Burgess. This novel interested me because of its individual language of 'Nadsat', a form of slang created by Burgess for gangs of violent English teenagers. The slang serves a serious purpose, which is too keep the violence of the protagonist from becoming unbearable to its reader, keeping the language partly veiled, for example making 'gratizny bratchny' sound more pleasant than its meaning 'dirty b*****d'. It is important to realise that its audience of the 60's have not yet become subject to such violence and despair explored in the novel. So what have I done? I have taken four characters from the novel (Alex's parents, Alex and the schoolmaster) and placed them into 'The Jerry Springer Show', creating a parody of the show. I have given Alex's parents the names of Janet and Derek and looked at their perspective of Alex's violent activities. As I would chronologically slot the show in just before the police catch him, I have kept Alex's attitude of his enjoyment of violence. When the schoolmaster has been beaten up and staggers off, that is the last we have heard of him in the novel, I decided to give him a voice and see what he would have said about his attack. ...read more.

The Nadsat slang has derived from many different language sources but many are Slavic in origin. A mixture of Russian and demotic English, with elements of rhyming slang and gypsy talk, 'O my brothers', as well as anglicized words and amputations 'em', 'pee'. I have kept Alex's syntax the same in 'The Jerry Springer Show', by using the Nadsat language as the new teen vernacular, however he still has a very formal register, "i have a small interest in sinnies perhaps for a bit of in-out-in-out but me and my threes droogs enjoy the night and crasting some old veck in an alley and viddy him swim in his blood". After studying his language he often descends into Biblical English, I have incorporated this to ensure that the character is perceived and sounds the same as he is in the novel "o my father...em". A transcript does not always make much sense, when looking at it recorded onto paper, due to its lack of punctuation (expect intonation of a question, as they are recognizable due to the change in the tone of the voice,) and its irregular speech pattern. Speech does not consist of standard written English; it contains elements of false starts, hesitations, repetitions, etc. In constructing my text transformation I was very aware of the conventions that the transcript discourse contained and incorporated them in. ...read more.

An American audience differs to an English audience, they are subjected to far more ridiculous ad exaggerated events enjoy conflict and character assignation at its worse. Americans love eccentricity and 'cheesy' games shows, and soap operas that are so over-the-top are considered flamboyant and 'naff' to the English society who prefer subtlety . The Jerry Springer show has been on screen for over a decade and yet it is one of America's famous and favourite television shows, but yet here in England 'The Jerry Springer Show' has failed to make a valid impression. These sections are important speeches to rally and motivate the viewers and I have therefore included key features of speech writing. This includes, pattern of three, "to keep them off the streets, to keep them entertained and most importantly keep them valued." This device helps emphasise and foreground issues. I have also used the personal pronoun "we" as it is inclusive, it enables Jerry to draw the audience into his speech. I have been able to begin a sentence with 'but' as speeches do not have to be grammatically The text transformation appears to be a success, it was read by several people who have an understanding of the film 'A Clockwork Orange', and was said to very good. I think that I have successfully been able to keep attitudes of the characters Alex and real life chat show host, Jerry Springer, as well as creating voices for the Schoolmaster and Alex's parents and changing the storyline into a discussion in the show. Freya Brown 1 ...read more.