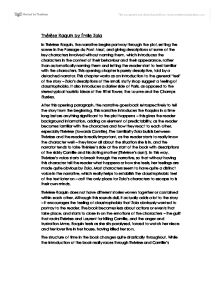 Th�r�se Raquin by �mile Zola In Th�r�se Raquin, the narrative begins partway through the plot, setting the scene in the Passage du Pont-Neuf, and giving descriptions of some of the key characters involved without naming them, which introduces the characters in the context of their behaviour and their appearance, rather than automatically naming them and letting the reader start to feel familiar with the characters. This opening chapter is purely descriptive, told by a detached narrator. This chapter works as an introduction to the general 'feel' of the story - Zola's descriptions of the small, stuffy shop suggest a feeling of claustrophobia. It also introduces a darker side of Paris, as opposed to the stereotypical touristic ideas of the Eiffel Tower, the Louvre and the Champs Elys�es. After this opening paragraph, the narrative goes back retrospectively to tell the story from the beginning. This narrative introduces the Raquins in a time long before anything significant to the plot happens - this gives the reader background information, adding an element of predictability, as the reader becomes familiar with the characters and how they react to each other, especially Th�r�se (towards Camille). ...read more.

Th�r�se Raquin does not have different stories woven together or contained within each other. Although this sounds dull, it actually adds a lot to the story - it encourages the feeling of claustrophobia that Zola obviously wanted to portray to the reader. The book becomes less about actions or events that take place, and starts to close in on the emotions of the characters - the guilt that racks Th�r�se and Laurent for killing Camille, and the anger and frustration Mme. Raquin feels as she sits paralysed, forced to watch her niece and her lover live in her house, having killed her son. The structure of time in the book changes quite drastically throughout. While the introduction of the book really races through Th�r�se and Camille's childhood, the time really slows down throughout the rest of the book as the plot takes place and the emotions really take over as the central focus. ...read more.

In this way the setting Zola uses reflects the emotions of the characters. Characterisation in the book is perhaps one of the most interesting aspects of the text. Zola said of the book in the preface to the second edition in 1868 (a response to the harsh criticisms Th�r�se Raquin faced at the time), 'In Th�r�se Raquin I set out to study temperament, not character'. Whereas in 1868, Doctors believed in the idea of temperament, nowadays psychology has moved on. The basic theory of temperament was that humans could be divided into certain 'temperaments' or psychological types according to certain physiological criteria. It is really interesting to consider this, especially as the descriptions Zola gives of his characters physically seem to match up with the personalities he gave them (or temperaments, as he intended). Camille, the sickly Mummy's boy who almost died so many times in his childhood, is described as having 'spindly arms and legs', with curly blonde hair and a freckly face. His physiological appearance seems to match with this idea of temperament, Camille's temperament being sickly and pathetic. ...read more.