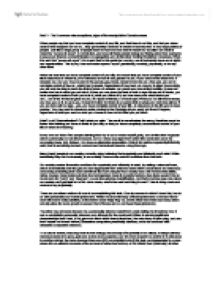 The 3 common misconceptions - signs of the manipulative consciousness.

Part 1 - The 3 common misconceptions; signs of the manipulative Consciousness. When people say that you have complete control of your life, and that there is no fate, and that you alone decide what happens and so on....they get horribly confused in what is meant by that. A very large portion of people. Just like a large group of people seem to have no idea what is meant by "equality" and what is meant by "we are all equal". In conclusion, you have all these people raving and flaring about how everyone is equal and there is no discrimination or segregation and all this other horribly far-fetched nonsense. When it is said that "we are all equal", it is meant that in this particular country, we all technically have equal rights and opportunities. This by far, does not make anyone "equal" genetically, mentally, physically, or on any other level. When it is said that you have complete control of your life, it is meant that you have complete control of your life in relevance to what it is, or in relevance to how it was granted to you. If you were at the wheel of a 3-wheeled car, and you have access to the pedals, gas, break, wheel to turn the car...then yes, you are in complete control of the car...which has 3 wheels. Regardless of how hard you may try to steer it accurately, you will only be able to reach the limit of what a 3 wheeled car grants you concerning mobility. It does not matter how much effort you put into it. ...read more.

I've always felt like I could accomplish something as well or better than anyone else, regardless of what it is; it has allowed me to dwell into mindsets and thought patterns which most of the homogenized society never dream of entering; it has granted me the fierce motivation to realize my self and my grand goals, standards, and views of things. Motivation is a key aspect here. Let's take an example. Suppose, there are two twins. Both twins are identical physically, have the same intelligence, yet one has this disorder, and another doesn't. The twin with the disorder will be granted this strong motivation to live up to all these expectations and accomplish all these tasks, and further progress him/herself, while the other will simply choose to 'go with the flow', and attempt nothing extra ordinary. Ultimately, the twin with the disorder will become superior to the other twin, in relevance to the society around them. This is an undisputable sequence of logic. Society is like a big consciousness (Read part 2 about mind vs consciousness); which subconsciously/indirectly manipulates it's own self for it's own benefit. Just like consciousness manipulates itself by fabricating a multitude of denial scenarios and other sly ways to alleviate emotional stress, society too does the same in it's own degrees respectively. When people label these mental deviations as disorders, the rest of the 'norm' society accepts it without question; for why wouldn't they, when this is like allying with another faction to battle a common foe [superiority]. Therefore, this allows for a strong psychological hype to exist against questioning the legitimacy of these negative labels, since such an overwhelming majority accepts them, people take for granted that there must be good enough reason for it therefore. ...read more.

An unfortunate paradox this is, which causes one to experience an internal struggle between mind and consciousness all their life; another reason why this evolution is a flaw. And this appears all throughout life - one's instincts [mind] tell one to strive for self gain and nothing but self gain, yet the emotional aspect of our society [consciousness] teaches us that self gain [or inconsiderate self gain, which practically all beings yearn for as a survival instinct, whether your consciousness allows you to accept it or not] is to be considered negative; therefore how can we abominations live? When the pinnacle of our existence rests among the scales of two opposing forces - the mind and the consciousness. We are simply evolutionary heretics. The human being is a living dichotomy; a damnation onto itself and those around it. Oh well..I suppose even nature is susceptible to allowing a flaw or two to slip from it's grasp every few million years. There will be two general types of audiences exposed to these writings - those with sufficient perception and awareness to accept the revelations written here as the truths they are, and the truths that their minds accept them for, and those who are incompetent of dealing with emotional stress, whose consciousness overpowers the logical mind, and will manipulatively distort these words into incoherence, beyond the victim's ability to overpower. Therefore, be you of audience A or audience B, ultimately your conclusions concerning what is written here will merely underline your current competence regarding the acknowledgement of truths, whether they be pleasant truths, or not. ...read more.