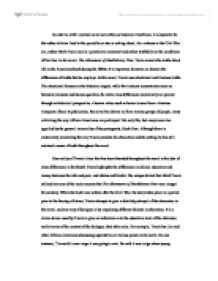 The Adventures of Huckleberry Finn discussed.

In order to craft a realistic novel set within an historical timeframe, it is essential for the author to have lived in the period he or she is writing about. As a witness to the Civil War era, author Mark Twain was in a position to comment and reflect truthfully on the conditions of his time. In his novel, The Adventures of Huckleberry Finn, Twain reveals the truths about life in the American South during the 1800s. It is important, however, to discern the differences of truths that he employs. In this novel, Twain uses situational and timeless truths. The situational focuses on the historical aspect, while the timeless concentrates more on thematic elements and human qualities. So while class differences and slavery are peered through an historical perspective, a human virtue such as honor is seen from a timeless viewpoint. Since its publication, the novel has drawn ire from various groups of people, many criticizing the way African Americans are portrayed. Not only this, but many were also appalled by the general immorality of the protagonist, Huck Finn. Although there is controversy concerning the way Twain presents his characters and the setting, he has still retained a sense of truth throughout the novel. One reality of Twain's time that has been threaded throughout the novel is the idea of class differences in the South. Twain highlights the differences in dialect, education and money between the rich and poor, and whites and blacks. ...read more.

Although it may seem as if Twain has created a racially-biased novel, it is his intention to make the time period as authentic as possible, and the racially-biased atmosphere was certainly present during his time. The relationship and ideas shared between Jim and Huck is a microcosm between the rich and the poor. Twain purposely begins the novel by directing the reader's attention to the fact that Huck has over six thousand dollars to his name. In that time, six thousand dollars was an opulent sum. It is easy to see that any sum of money less than that would be inconsequential to Huck. Additionally, living a very primitive life before out in the wilderness means that money does not become a necessity for Huck. Twain elucidates on class differences through the discussion of money, as Huck's perspective on money is antithetical to Jim's perspective. Jim views money as a way of achieving freedom from slavery. This is exemplified when Jim speaks of his future plans: "I been rich wunst, and gwyne to be rich again" (Twain 53). Money would help Jim reunite with his family and lead to a better standard of living in the future. It can be seen that throughout the novel, Jim tries to earn money whereas Huck shows a measure of indifference towards riches. On the river, there are no class differences between Huck and Jim, and a sense of honor develops between the two stowaways. ...read more.

As the African American population became more educated, they became upset over the way Twain depicted their ancestral past. A new question is derivative of this: are African Americans really upset over the portrayal of that time period or is it only the realm of the black writer to discuss slavery in the past? In reality, Twain's novel is a powerful satire on slavery and its effects. Even though slavery was abolished, African Americans were treated as second-class citizens even 100 years after, until the Civil Right Movement began in the mid-1950s. The book's message is clearly one against slavery. Nevertheless, some passages are reflective of the societal immoralities that Twain grew up surrounded by. Though containing racist elements, the racial content is factual of the time. Twain's commitment to bringing out the truth is unmistakable, even amidst the past and present controversy swirling around the novel. Twain's truths are reflected in his writings. Although this literary work is a piece of satire, the timeless thematic messages are clear to the reader. Yet, it is not the timeless truths that are controversial, but the situational truths. In this sense, the historical aspect of the novel directly attracts the reader, and is ultimately dominant over the subtle thematic elements. As mentioned, it is important to focus on the time period of the novel, and to keep the notions within an historical context. By all means, Mark Twain utilizes this work as an instrument to reveal the factuality of an epoch in history. ...read more.