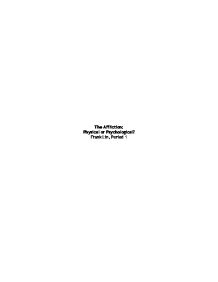 The Affliction: Physical or Psychological?

The Affliction: Physical or Psychological? Frank Lin, Period 1 They were shameless in their claims. They were ruthless in their allegations. In the spring of 1692, a group of young girls set off a fire of immeasurable proportions in the sleepy town of Salem, Massachusetts, and when the smoke finally cleared more than a year later, twenty-four innocent men and women were left dead. The gentle Mary Parker, the outspoken Martha Corey, the pious Rebecca Nurse - no matter who the victims were, the girls pursued them with a relentless devotion. They mercilessly accused anyone they despised (and later, simply anyone) of witchcraft. In court, they screamed and moaned hysterically as soon as any glimmer of hope emerged for the accused. Their fitful cries sealed the fates of every single one of their victims, often serving as the only evidence that would condemn the innocent to hang. All this, and one cannot help but be confounded by one simple question: what caused the girls to go to such an extent just to see their neighbors die? At the center of the Salem Witchcraft Trials were three strikingly different individuals: Betty Parris, a shy, timorous, and reasonably conscience-guided nine-year-old girl, ...read more.

Soon, other girls in the community wanted to join Tituba's circle. By then, Tituba had already begun reading fortunes, an act that was considered to be sinful by the strict, austere Puritan community. It was not long before the secret s�ances "began to put a strain on nine-year-old Betty Parris" (van der Linde, 32). It is entirely reasonable, therefore, to conclude that Tituba's stories led to the psychological breakdown of Betty Parris, and eventually, the other girls as well. By late winter, Betty and Abigail were both acting extremely strangely. They "suffered convulsions and babbled incoherently...appeared to be bewitched by something" (Rice Jr., 25). Similar symptoms quickly spread to the other members of Tituba's circle. When it became clear that the medical treatments available at the time were of no help to the girls, the residents of Salem turned to a supernatural explanation of the girls' afflictions. Church leaders who visited them declared that "the souls of these youngsters were in terrible danger", fueling the fear that the girls were in the grips of evil (van der Linde, 35). The Puritan community began questioning the girls as to who was afflicting them. ...read more.

Instead, an alternate explanation for what happened to the girls of Salem proposes that a physical illness, and not a psychological one, ailed the girls. Encephalitis was not a well-understood disease during the time of the girl's ailments. However, "the symptoms reported by the afflicted New Englanders and their families in the seventeenth-century strongly resemble the symptoms of encephalitis" (Carlson, 124). The circumstances surrounding the girls' afflictions also strongly resemble what happened during the encephalitis epidemic of the early twentieth-century, in which "most of the afflicted were young women or children, and afflictions appeared in late winter and early spring and receded with the heat of the summer" (Carlson, 125). This, however, leaves one to question whether Tituba and her storytelling had anything to do with the girls' afflictions at all. Perhaps not. However, due to the close proximity of the two incidents, it is easy for history to assume that they are related. It is only after a careful analysis of the events leading up to the girls' bizarre behavior that the conclusion can be formed: the underlying cause of the Salem Witchcraft Trials was not a psychological affliction but a physical one, most likely due to an outbreak of encephalitis. ...read more.