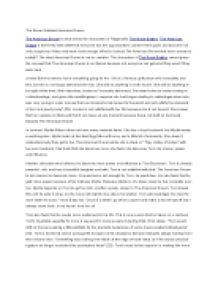 The American Dream is what drives the characters in Fitzgerald's The Great Gatsby.

﻿The Never-Satiated American Dream The American Dream is what drives the characters in Fitzgerald's The Great Gatsby. The American Dream is the firmly held belief that everyone has the opportunity to achieve their goals and become rich and prosperous if they only work hard enough. What is it about The American Dream that never seems to satisfy? The ideal American Dream is not so realistic. The characters of The Great Gatsby cannot grasp the concept that The American Dream is an illusion because not everyone can get what they want if they work hard. Jordan Baker seems to have everything going for her. She is a famous golf-player who is wealthy and thin, but she is not happy with what she has. She will do anything in order to win. She will do anything to be right all the time. Nick describes Jordan as "incurably dishonest. She wasn't able to endure being at a disadvantage, and given this unwillingness I suppose she had begun dealing in subterfuges when she was very young in order to keep that cool insolent smile turned to the world and yet satisfy the demands of her hard jaunty body" (63). Jordan is not satisfied with her life because she is not honest. She knows that her success is fickle and that it can leave at any moment because it was not built on hard work towards The American Dream. In contrast, Myrtle Wilson does not have many material items. She has a loyal husband, but Myrtle wants everything else. Myrtle looks at the East Egg folks with envy and a little bit of animosity. She doesn't understand why they get to live The American Dream while she is stuck in "They Valley of Ashes" with her poor husband. She feels that she deserves more; she feels she deserves Tom, his money, power, and influence. Another character who believes he deserves more power and influence is Tom Buchanan. ...read more.

Myrtle Wilson is no exception. Instead of abiding by them, Myrtle, who represents the low and ignorant class of America, tried to break the social barriers and thus pursues wealth by any means necessary. Using her sexuality and vulgar mien, she becomes false for abandoning and dismissing her own social foundation, and like Nick, we as readers are repulsed by her grotesque approach to entering the rich class. At one point, and quite humorously to the knowing onlooker, Myrtle complains about a service done for her that was so expensive that "when she gave [Myrtle] the bill you?d of thought she had [her] appendicitus out" (35). Obviously misusing her wording, it is comical only because she is trying so hard to fit into the snobbish upper class persona, and failing miserably. Her rudeness becomes more apparent when she "rejected the compliment [about her dress] by raising her eyebrow in disdain" (35). She is so false in her manner that Nick observes that she "had changed her costume?and was now attired in an elaborate afternoon dress" (35). This articulate description of Myrtle captures her fraudulence. She was not being herself, but almost putting on an act to perform as an upper class lady. It is a detestable, ambitious tactic to chase social superiority. Another tactic is her affair with Tom Buchanan, who represents the rich upper class. This affair and connection with Tom represents the falseness and decay in class distinction. Out of context, Myrtle?s political aspirations are admirable: she is a woman who is practically able to change her social position.?an American ideal. Socially, she is an adulterous woman using her s****l ardor and coarse manner to force her way into something she does not belong to?an American reality. The American dream of social mobility has been twisted into disgusting ambition. The American dream has collapsed. Jay Gatsby?s social weakness falls along the same lines as Myrtle?s. ...read more.

The American dream became corrupted, its main aims were wealth and power. Gatsby became corrupted because his main goal was to have Daisy. The only reason he want Daisy was that she symbolized wealth and took on the characteristics of money. "Her voice is full of money"(page127). Gatsby needed to have an enormous mansion so he could feel confident enough to try to win Daisy. " That huge place over there? Do you like it? I love it" (page95). The tainted dream was so empty that having accouterments of wealth could even incite feelings of love. "He's the man who fixed the World Series back in 1919" ( page 78). The dream became so focused on money that any means of a obtaining it were condoned, even if it were unscrupulous. Result of American dream being corrupted is that the motivation and ambition were gone and the dream is left with the pursuit of an empty goal. This is displayed when Daisy says "Do you always watch for the longest day of the year and then miss it? I always watch for the longest day of the year and miss it." This quote shows the lack of motivation and meaningless to which the empty rich society has turned to. Another result of this corrupted dream is that the dearth of the idea that each person no matter who he or she is can become successful in life by his or her own hard work. This ignorance is shone when Tom says "The idea is if we don't look out the white race will be utterly submerged. It's all scientific stuff; it's been proved" (page 17). Ignorance and the ideal of looking out for oneself is prevalent. Where as in the pure American Dream striving to accomplish ones' own personal goal is ones main focus. One should use the American Dream for motivation and hope that one can achieve ones personal goal. The American Dream should not be centered on money and other materialistic things but on a real goal. ...read more.